Northwestern Students Lose before NLRB—But They’ll Be Back! 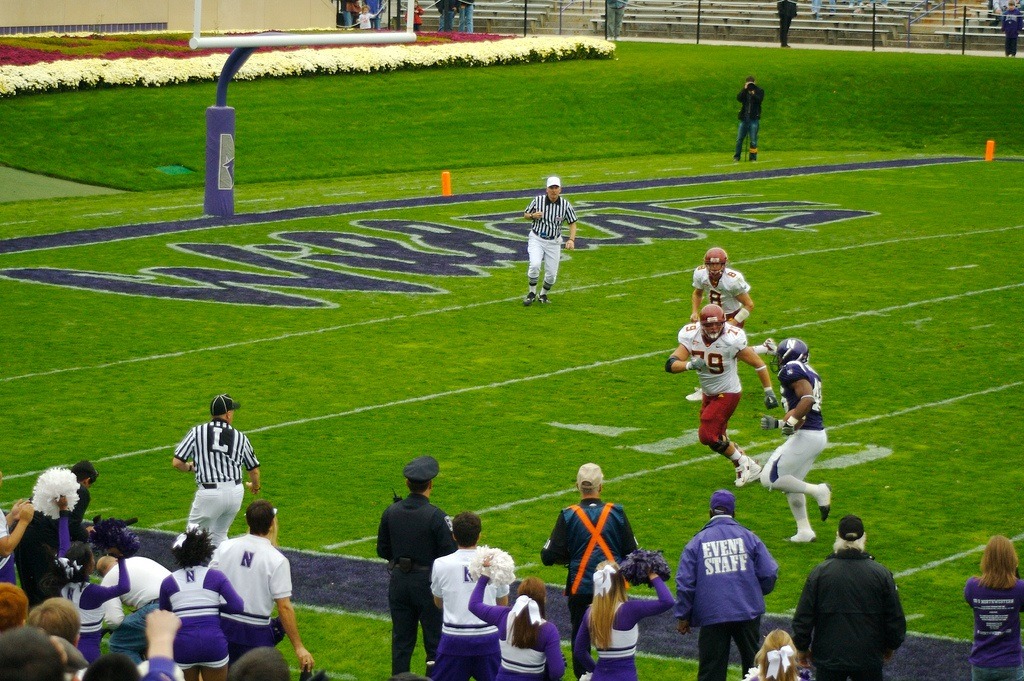 In a story we have covered from the outset, the National Labor Relations Board brought a halt to the effort of Northwestern University football players to unionize as employees of the NCAA-affiliated college program. The ruling of the NLRB was unanimous in favor of the private, nonprofit Northwestern and against the college players, who were led by former Northwestern quarterback Kain Colter.

The “private” nature of Northwestern is one of the issues that concerned the NLRB, because only 17 of the 125 NCAA “bowl-eligible” colleges are private entities,  the rest state schools. Given that the NLRB’s formal jurisdiction is limited to private workplaces, as Northwestern is, the NLRB worried about the impact on the state schools of granting union powers to the Northwestern students:

In the decision, the Board held that asserting jurisdiction would not promote labor stability due to the nature and structure of NCAA Division I Football Bowl Subdivision (FBS). By statute the Board does not have jurisdiction over state-run colleges and universities, which constitute 108 of the roughly 125 FBS teams. In addition, every school in the Big Ten, except Northwestern, is a state-run institution. As the NCAA and conference maintain substantial control over individual teams, the Board held that asserting jurisdiction over a single team would not promote stability in labor relations across the league.

In other words, it wasn’t quite a matter of the merits of the Northwestern footballers’ argument, but rather the impact of making a decision for one school that would disrupt the labor relations between students and universities at 108 schools not covered by the NLRB. In the porous world of public, quasi-public, and private sector employers that sometimes compete in the same space, the NLRB chose to put on its blinders and conclude that were it to rule on the merits of the argument presented by Colter and his colleagues, it could disrupt conditions at the University of Alabama, Michigan State, Ohio State, and UCLA, to name a few of the public sector schools that compete with Northwestern, a notorious NCAA punching bag in the bowl competition.

Testimony in the case recounted the 14-hour practice days of NCAA football players in August before school officially starts and the longer-than-fulltime hours of football players during the school year for games, practice, and travel. Moreover, by employing college football athletes for the price of a scholarship, the NCAA schools had combined revenues of $2.8 billion in 2013 and a profit of $1.2 billion. Even Northwestern had profits of $8.8 million in 2013, though the school will never be confused for a team of the caliber of Florida State or the University of Oregon.

While exhilarated Northwestern execs breathed a sigh of relief and complimented the efforts of its “student-athletes” to bring some issues to the public’s attention, Colter issued a polite statement of disappointment in the NLRB ruling, and added, “The overall legacy from this movement is that when players come together to stand up for what they believe in, things get changes…. For decades, advocates have been fighting for some things that we got changed in one year.”

Do realize what the Board’s decision really means. When the Board said in its decision, “Just as the nature of league sports and the NCAA’s oversight renders individual team bargaining problematic, the way that FBS football itself is structured and the nature of the colleges and universities involved strongly suggest that asserting jurisdiction in this case would not promote stability in labor relations,” some important implications emerge.

One is that limiting the application of the NLRB’s authority over Northwestern football players because of the disruption their unionization would cause to the state schools that are in the Football Bowl System is not mandated by the National Labor Relations Act. It was decision of expediency by the NLRB, which bypassed dealing with the rights of the Northwestern players and the responsibilities of their employer. Second, by citing the NCAA’s own oversight over the 125 bowl-eligible schools—and relying on that oversight rather than making a ruling on the issues presented by the so-called student athletes themselves—the board elevated the nonprofit NCAA into a de facto definer and arbiter of labor rules and conditions at the schools.

Perhaps it is harsh to say, but we’ll say it; the NLRB decided that the “novel and unique circumstances” of the players’ petition—that the Board had “never before been asked to assert jurisdiction in a case involving college football players, or college athletes of any kind,” and that “the scholarship players do not fit into any analytical framework that the Board has used in cases involving other types of students or athletes”—allowed it to take a pass on the merits of the argument raised by Colter. Thus, the Board offered these flimsy justifications—fear of disrupting the array of bowl-eligible state schools, the intimation that the NCAA was keeping an eye on the issues between “student-athletes” and their university quasi-employers—lacking believability and failing to address the arguments of Colter and his organizing colleagues.

In reaching its decision on Northwestern, the NLRB did not preclude future petitions of this kind. Ragomi Huma, the director of the College Athletes Players Association, said that meant “the door is still open” and pointed out that the NLRB decision did not say that the college players were not employees. The NLRB probably had the same thoughts when it was presented with its first case of graduate student teaching assistants, too, hoping that some extraneous variables would preclude the NLRB having to rule the way the NCAA’s standards and enforcement alleviated the board of having to rule on the merits at this time.

Someone ought to tell the suddenly magnanimous Northwestern administrators not to get too elated with this NLRB decision, because someday in the future the NLRB will face another “student-athlete” employee question with a broader impact: the opportunity to rule on all 125 bowl-eligible NCAA schools, so that the excuse of disrupting labor stability by ruling on only one private university will be put to bed.—Rick Cohen