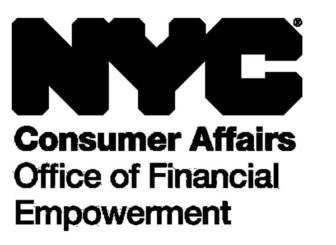 In Next City, Oscar Perry Abello highlights the results of a recent report issued by the Office of Financial Empowerment (OFE) at New York City’s Department of Consumer Affairs that examines the causes of neighborhood financial distress and proposes systemic solutions.

New York City, as Abello points out, is known for its extensive “network of Financial Empowerment Centers, which offer free financial counseling now to around 8,500 households a year.” The program works well, but misses many. Overall, the number of households reached annually, Abello notes, is “just three out of a thousand.”

OFE decided to see if the city could work at the level of the neighborhood, rather than relying on case-by-case financial counseling. Abello emphasizes that how the study was conducted was as important as the outcomes. In particular, rather than “paying a few consultants a couple hundred thousand dollars (or some academics a few thousand dollars) to come up with an answer, the agency put out an RFP in 2016 to community-based organizations in neighborhoods.” The report adds that, “The initiative’s participatory and grassroots research methods, cross-sectoral collaboration and development of community allies and place-based strategies to improve financial health offers insights for the financial health, community development and asset-building fields.”

The winning proposals came from the New Economy Project and the Bed-Stuy Restoration Corporation (BSRC) and focused on the city’s East Harlem and Bedford-Stuyvesant neighborhoods. (While East Harlem and Bed-Stuy are identified as “neighborhoods,” each is the size of a mid-sized city, with East Harlem being home to 117,000 residents and Bed-Stuy in Brooklyn home to 150,000 people.) With these partners, OFE created a group called the Collaborative for Neighborhood Financial Health to guide the research work. The goals of the Collaborative were to create a framework that includes:

Together with a host of supporting local groups in the two neighborhoods, hundreds of residents participated in interviews, community workshops, and pilot projects to help shape report recommendations. According to Tracey Capers, BSRC executive vice president for programs, “It was not just about reaching a hundred more people and how many more can we get in the counseling door. It was really thinking about, what is an overall structure or system or environmental change we could help make in the neighborhood.”

The definition of neighborhood financial health that emerged is one in which “neighborhood conditions promote long-term financial resiliency and opportunity for residents, and provide resources that residents use to spend, save, borrow and plan for life.” The Collaborative developed five goals—which, in addition to financial services access, include access to consumer goods and services, access to jobs and income supports, stable housing, and opportunities to build assets and plan for the future.

One pilot showed the importance of credit union promotion. As Abello explains, “New Economy Project worked with one of its partners, the Lower East Side Peoples Federal Credit Union … to create a ‘pop-up credit union’…New Economy Project also trained a few residents to serve as ‘promotoras,’ financial health promoters among their peers, modeled after health promotion workers…to increase access to healthcare in low-income communities.” The result: between January to March 2017, the local credit union in the Spanish-speaking community opened twice as many new accounts as in the first quarter of 2016.

More broadly, the report envisions many possible future interventions. The East Harlem group envisioned a future with a food co-op that included an onsite credit union sited on land owned by a community land trust, as well as a youth farm and a neighborhood project that focused on “place-based, cross-sectoral cooperative development.” The Bed-Stuy group envisioned creating a map of local businesses, launching a neighborhood investment campaign and developing a neighborhood-based business startup incubator.

In the conclusion, the report calls for New York City “to support the formation of community-owned neighborhood economic actors; permanently affordable and own-able housing; and the creation and retention of grocery stores, financial services and childcare providers to serve the needs of a neighborhood’s residents.”

Abello notes that, “The Office of Financial Empowerment and its partners expect these and other insights from the research to help guide follow-up work.” He adds that the agency “has even added a staff member for a new position focused on community wealth building.”—Steve Dubb