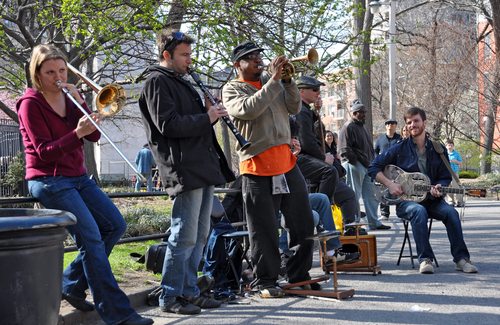 NPQ appreciates a fundraising event that is completely aligned with the organization it benefits, so that’s why we like the silent auction sponsored by the NYU Faculty Against the Sexton Plan. The group, which includes 400 faculty members of New York University, is working to oppose NYU’s Sexton Plan, a multibillion-dollar expansion further into the downtown Greenwich Village neighborhood in New York that the college calls home. The group believes that the expansion will not only threaten the Village’s historic body and soul, but that it will increase tuition at a school “where the students are the most heavily indebted in the nation.” Besides the fact that the cause is more than worthy, the prizes at this auction are intimately reflective of the sensibilities of the effort.

This auction has some prizes that are scary and thrilling all at once. My favorite is a lunch with Fran Lebowitz, who really can find fault with just about anyone. Personally, I do not know if my frailish ego would survive the fact that I would know for sure that 1) I would annoy her, and 2) she would use me as the butt of some story later.

As basic research in case you want to enter into the fray, here are some of Fran’s thoughts:

“Original thought is like original sin: both happened before you were born to people you could not possibly have met.”
― Fran Lebowitz, The Fran Lebowitz Reader

“I never met anyone who didn’t have a very smart child. What happens to these children, you wonder, when they reach adulthood?”
― Fran Lebowitz, The Fran Lebowitz Reader

“People have been cooking and eating for thousands of years, so if you are the very first to have thought of adding lime juice to scalloped potatoes try to understand there must be a reason for this.”
― Fran Lebowitz, The Fran Lebowitz Reader

“This is not my favorite way to wake up. My favorite way to wake up is to have a certain French movie star whisper to me softly at two thirty in the afternoon that if I want to get to Sweden in time to pick up my Nobel Prize for Literature I had better ring for breakfast. This occurs rather less often than one might wish.”
― Fran Lebowitz

But I am confused by the Pickup/Shipping Instructions listed at the bottom of the page, at least as it pertains to Lebowitz. “Will ship most items (determined on a case by case basis), please see each item for instructions. Pick-up available in NYC for most items.”