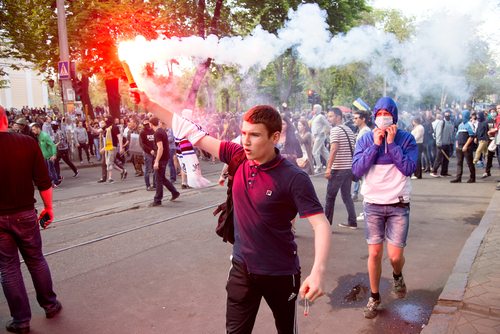 Marking the ever-deepening strife in eastern and southern Ukraine is the fact that it is not just a conflict between ethnic Ukrainians and ethnic Russians. In Crimea, a large population of Tatars found themselves once again at the mercy of the Putin government, just like their forefathers were threatened and then displaced by Stalin.

In Odessa, where violence has led to the deaths of dozens of people, there is a population of some 40,000 Jews. Many American Jews have relatives who came to this country from the Odessa region after having been subjected to pogroms at the hands of local inhabitants and later by attacks and extermination by Nazi invaders. Putin’s government is not shy of reminding observers that many Ukrainians welcomed the German invaders, that some served as guards at concentration camps such as Sobibor, Auschwitz, and Trawniki, and others participated in the round-up of Jews for mass exterminations such as what happened at Babi Yar (commemorated in an iconic poem by Yevgeni Yevtushenko, with the haunting opening line, “No monument stands over Babi Yar.”)

Emotions stir when Russian authorities point out the far right wing elements in Ukrainian society and suggest that the current interim government is responsive to fascists. But, just as in the case of Germany, the collaboration of many Ukrainians with the Axis powers in the mid-twentieth century doesn’t mean that today’s Ukrainians ought to be held responsible for the crimes against humanity perpetrated against Jews seven decades ago. Given the purges of Jews throughout the history of Russia, including by Stalin, no country has clean hands in this region, which is why so many Russian Jews picked up and left for Israel beginning in the 1970s when they had the chance.

Odessa’s Jews, however, say that despite the violence occurring around them, they are not leaving. The Jerusalem Post reported that Odessa’s Jews were preparing to evacuate due to the clashes between Russian secessionists and Ukrainian nationalists, but Jewish leaders in Odessa denied the report. Tania Vorobyov, a spokesperson for Beit Grand, the largest Jewish community center in the region, said that the “reports about evacuation are baseless rumors.”

A spokesperson for Odessa’s Chabad community, Berl Kapulkin, also denied the rumors, expressing dismay at the violence, but adding, “We do not see any immediate danger to the Jewish community. So no buses with open doors, no running motors ready to go.” The fear originally reported in the press was the rise of anti-Semitism, but the latest reports suggest that Odessa’s Jewish community is more concerned about anarchy than anti-Semitism, which puts them in the same camp as other Ukrainians.

Undoubtedly, some Jewish organizations in the Ukraine will advise their followers that enough is enough and that the time has come to leave because of the possibility of a resurgence of Ukrainian anti-Semitism. Many Ukrainian Jews, however, believe that the rumors and threats of anti-Semitic activity are actually artificial Russian provocations. Jewish organizations in Odessa like the Beit Grand center, as well as Odessa’s Jewish Family Services, the Beitenu Center for Jewish Children and Families, and other charities in the community, are supported by the American Jewish Joint Distribution Committee, suggesting that whatever occurs in Odessa and other Ukraine communities with significant Jewish populations will affect and perhaps involve U.S. charitable interests.

After pogroms, the Holocaust, and decades of post-World War II discrimination at the hands of Soviet authorities, Odessa’s Jews—just about all Ukrainian or Russian speakers, with only the elderly typically communicating in Yiddish–understandably just want to be able to live their lives and stay in the communities that they have rebuilt after the horrors of the twentieth century.—Rick Cohen