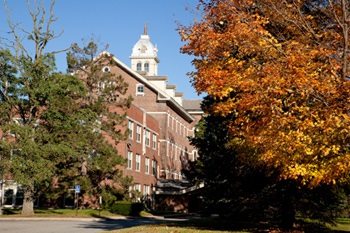 Christine Plunkett is, as of five days ago, the former president of Burlington College. She resigned five days into the semester in the face of demands from students that she do so, during a post-board-meeting physical confrontation in which they blocked her car from exiting a parking lot while chanting, “Hey hey, ho ho, Christine Plunkett’s got to go!”

At the time, it was not clear if the desperate “OK, I resign. Happy?” was meant seriously, but Plunkett followed it up with a resignation by email to the board the next day.

While Plunkett was targeted by the students, the roots of the college’s difficulties seem to stretch back much further than her short tenure. The college, which appears to have a serious problem with underenrollment (student body under 200), was placed on a two-year probation by the New England Association of Schools and Colleges (NEASC) in June because of a tangle of financial concerns. It retains accreditation for now but could be in trouble there as well if it is unable to show progress in a now-required series of reports to NEASC.

Plunkett’s resignation follows that of its second-highest administrator, Stephen St. Onge, vice president for academic and student affairs, so the board has worked quickly to tap a new interim leadership team. But the students have now switched their focus to the board chairman, saying that Yves Bradley may have a conflict of interest. Though he was not on the board at the time, Bradley was the listing agent when the college bought 32 acres from the Burlington Catholic Diocese in 2010, acquiring a debt of about $10.5 million. This debt is one element of the financial straits in which the college finds itself.

The public upheaval is, of course, likely to have an impact on enrollment as it emphasizes the fact that accreditation may be at risk.—Ruth McCambridge