On Justice, Reconciliation, Faith and Philanthropy: Rev. Wilson of Deaconess Foundation Talks about a Model for Addressing Racial Justice 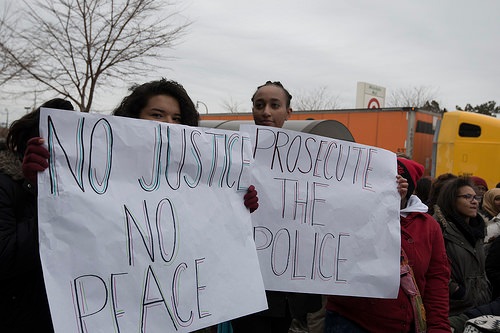 In light of the events in Baltimore yesterday surrounding the death of Freddie Gray, we bring you this report from the Council on Foundations, presenting the viewpoint of the Reverend Starsky Wilson of the Deaconess Foundation and the ongoing Ferguson Commission.

Chairing an important panel on faith and philanthropy, Edward Jones, the Director of Programs for the Association of Black Foundation Executives, reminded participants that during the days of Jim Joseph’s leadership of the Council on Foundations, there was a program called “philanthropy and the black church.” As Joseph wrote at the time in his widely respected essay, Black Philanthropy, The Potential and Limits of Private Generosity in a Civil Society, “the Black church…was from the very beginning the center of Black philanthropy.” In Joseph’s view, “the Black church has always been a kind of community foundation; encouraging giving, collecting funds and distributing them for the good of the community.”

In a way, the memory of Joseph’s words infused the discussion Jones led with presenters Lisa Sharon Harper of Sojourners and the Rev. Starsky Wilson, whom NPQ interviewed and featured this past February. NPQ was present to catch up with Wilson’s progress on the Ferguson Commission and the intersection of his efforts there with his philanthropic leadership at the Deaconess Foundation.

Much of the theme of this year’s Council on Foundations annual meeting has been finding common ground between peoples on opposite sides of various issues. Few issues challenge that as much as what has been happening to young black men—sadly, with horrific frequency—since the death of Michael Brown in August in Ferguson. The challenge comes to Wilson in his dual roles as co-chair of the commission and CEO of the foundation. Calling the community to forgive, he indicated, needs to be accompanied by calling the community to justice. If it is simply a matter of forgiving, perhaps better stated as reconciliation, that still leaves the question of the kind of “just world” people are trying to develop—or ought to develop.

Repeatedly, Wilson and others cited the work of Allan Boesak, the South African anti-apartheid theologian and activist, particularly his concept of “radical reconciliation.” As Boesak and his coauthor Curtiss Paul DeYoung wrote:

“Too often ‘reconciliation’ is used merely to reach some political accommodation that does not address the critical questions of justice, equality, and dignity that are so prominent in the biblical understanding of reconciliation. Such political arrangements invariably favor the rich and powerful but deprive the powerless of justice and dignity.”

Wilson embellished on Boesak to the extent that we need an opinion of what a just society looks like, “an eschatological definition of hope.” If you track back the history of philanthropy, many of the social benefits or bulwarks of our society were produced with the help of philanthropy, but often accompanied by faith partners. One only need think of the accomplishments of the Civil Rights Era, when people of all faiths were on the front lines, fighting for justice. Earlier in the conference, Cornell Brooks, the president and CEO of the NAACP, reminded the gathering that when Medgar Evers was assassinated, it was religious leaders of all faiths who joined together against the vicious bigots who killed him.

Is the Ferguson Commission an example of faith-infused philanthropy? In a way, it might be. The commission’s co-chairs are Wilson, a pastor in the United Church of Christ, and Rich McClure, who he described as an evangelical Christian (though, in another comment, he pointed out that the tendency of analysts to divide “black churches” and “evangelicals” is an artificial distinction, a social categorization based on race as opposed to a religious distinction, since most black Christians are themselves evangelicals). Consistent with the notion of focusing on a just society, the commission, Wilson says, is engaging in a structural assessment of the region’s social disparities to find solutions not only to the immediate, visceral issues that led to the death of Michael Brown, but to the underlying disparities that need to be overcome.

How is the Commission doing? It has now had 10 full commission hearings and 17 workgroup meetings, engaging more than 2,000 people. An interesting dimension is that Wilson, like others, would never have expected young Mike Brown’s death to be followed so quickly by several more, most recently Freddie Gray in Baltimore. As a result, the expected September product of the Ferguson Commission has meaning and relevance to a much broader geography than Ferguson, suburban St. Louis County, or the St. Louis regional area.

The other incidents “raise the stakes of our work,” Wilson says. “First, it says to me there’s a value in how we do our work (at the Ferguson Commission)…that is applicable to other communities across the nation.” As such, it not only redoubles the commitment of the commission members to do their work with attention to how other communities might replicate and learn from it, but it redoubles the commitment of the commissioners to the seriousness of their responsibilities in Ferguson itself. These other communities haven’t created their versions of a Ferguson commission, if they ever will at all, but should they do so, the spotlight will be on what the Ferguson Commission did or didn’t accomplish—and how it went about its work. At the same time, Wilson acknowledged that the most recent meeting of the commission was its least well attended by the public. Maybe a kind of “Ferguson fatigue” has set in, but the events in Staten Island, Tulsa, South Carolina, and now Baltimore underscore the importance of the commission doing its work.

The product of the Ferguson Commission will be a report with recommendations, but some will be urgent actions and some will be long-term challenges, generational tasks. The urgent areas may be around the top priorities established by community members—citizens’ relations with law enforcement, the municipal courts, and governance. But the recommendations on social equity issues will be long-term tasks, calling attention to the institutional structures that are needed to promote and hold accountable the region’s solutions to social inequities.

The combination of urgent and long-term tasks challenge the commission to the task of “translation to implementation.” That will mean realigning services with the needs of the community, the shifting poverty patterns in the region, and the systems of career support and mobility for narrowing or overcoming inequities. It needs a backbone organization to be identified and funded to deal with short term and long-term realignment of services, including potential consolidation of service providers when necessary.

In some ways, while difficult, the policing and court issues can be logically overcome. The police hardly want to be engaged in chasing down tiny infractions for the purpose of generating fees and fines that provide capital for a cacophony of suburban St. Louis County jurisdictions. Both houses of the state assembly, controlled by Republican majorities, know that municipal governance reform is needed. If the policing problems are in part due to the ravenous appetites of local governments for revenues that they can generate through tickets and minor infractions, the legislators as well as the Ferguson commission members know that this cannot stand. Nonetheless, they are going to have to think through incentivizing better police performance and disincentivizing or removing the structures that make policing troubling.

Is Wilson’s leadership of the Ferguson Commission faith-based? Not by intent or structure, but Wilson’s faith cannot be divided from his motivation to serve on the Commission. “I don’t believe in this bifurcation of personalities,” Wilson says. “The work I do fits into my church work. From the foundation standpoint…our new strategy is to engage in more public policy dialogue.” It isn’t a strategy to pursue or promote a religious agenda, but to have the foundation—and the church—broadly engaged in the public dialogue around community issues.

That may be the arena in which Wilson’s faith-based motivations and his philanthropic pursuits cross into the Ferguson Commission, a sense of legitimate, dedicated, consistent engagement. Wilson made a point that no one could have missed that he called “attribution without contribution.” He was remarking about the people—organizers, nonprofits, funders, and whoever—who sort of appeared in Ferguson in the wake of the shooting of Mike Brown, spending who knows how little time there before transforming themselves into instant experts and organizers on the scene, and in some case looking for funding to continue.

“You have to be clear whether people have a footing on the ground in the places where they’re working,” Wilson admonished, not just how long they were there, but whether their presence and commitment were long lasting. He suggested that in some cases, these people who “parachuted” (our term) into Ferguson to present themselves as helping with and solving problems on the ground are “disingenuous if not dishonest” and, by doing so, are “getting in the way of the real work.”

People on the ground in desperate situations are used and abused by the inauthentic interveners who show up for a press conference, a march, a chance to get a few moments on a CNN interviewer’s mic. The CNN anchors who couldn’t tell a real local leader from the parachute artists may have fallen for it, but the people in Ferguson—and activists like Wilson—are not swayed by these interveners’ hunger for attribution without a substance of real, long-lasting contribution. We suspect that Rev. Starsky Wilson will not have to prove his contribution to Ferguson, and in doing so, his products through the Commission and through the foundation’s grantmaking will be reflected in changes in police-community dynamics in Ferguson and in the structure and dynamics of philanthropy in greater St. Louis.