On Surviving Real Innovation: A Letter to the International Consortium of Investigative Journalists

A recent account in the New York Times of the current state of the International Consortium of Investigative Journalists, the nonprofit journalism site that coordinated the wide ranging, multinational investigation that flowed from the leaking of the Panama Papers, was excellent but perhaps a little short on a description of the very common dynamics of real innovation, so we thought we would try to complete the picture.

As the NYT reports the situation, the ICIJ is having financial problems; is struggling with the Center for Public Integrity, its parent organization; and is losing some of its key people as a result of all of that. This scenario sounded uncomfortably familiar, as it’s relatively common for organizations that innovate. With all the fetishizing of innovation that goes on in funding circles, have philanthropists ever really gotten the hang of it?

Anyway, the story made us want to reach out in a way that would be open to funders.

Dear Colleagues at the Consortium:

We here at Nonprofit Quarterly were personally blown away by the networked journalistic model that you used to carry off the Panama Papers Investigation. It was boldly experimental and its promise was obvious, pulling multiple partners to order to manage an endeavor that was unassailable by a single organization. You took a risk and innovated—hoping, I imagine, that onlookers with money would see the promise you demonstrated and ensure that you were able to gird up for the next phase.

But here you are, laying off journalists who know the quirks and nascent dynamics of the model you are pursuing, moving house to save costs, and experiencing “tensions” with your parent organization. We’ve been there. We, too, once had a parent that grew incompatible, and we have run a number of deficits over the years, especially when we tried to stretch and build something new. It took us more than a decade to rework our system so that sustainability was somewhere in the realm of possibility.

In all of that, what we found was that yes, we had to change, but it was not our basic concept that was the problem; in fact, that was our ace in the hole. Through many rounds of consultants, we clung to the idea that we needed a brand new model to make a new kind of journalism work in this century. It’s fine to depend upon philanthropists for seed money, but it is your concept that must be powerful enough to attract them and your public you are responsible to, and when they come, they should be prepared to stay a while.

It’s called “patient capital.” In our case, to get all this done, we endured years of instability and had to break with our parent so our focus could be as acute as it had to be. We had to gather supporters and wait for the money while we played with the model.

It was almost the death of us.

While we were nervously waiting for our board to call it quits, which they thankfully never did, a friend sent me a little diagram to explain what we were experiencing: 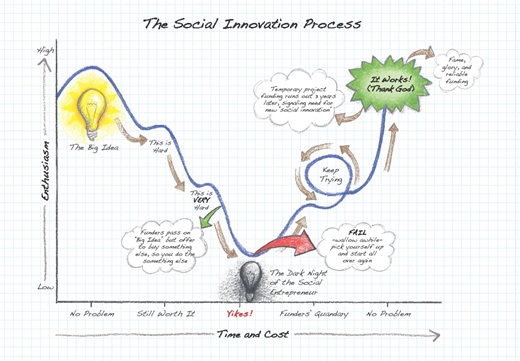 Your diagram would be somewhat different because you have already experienced a highly influential win that people are still abuzz about, but I guess we just wanted to check in to say to you, “Been there, done that, still here!” And to funders of new journalism, we say, “Get in there and think about what might be done with this weird beast just emerging from its cocoon.”