Our Bodies Are the Front Lines: Responding to Land-Based Gender Violence 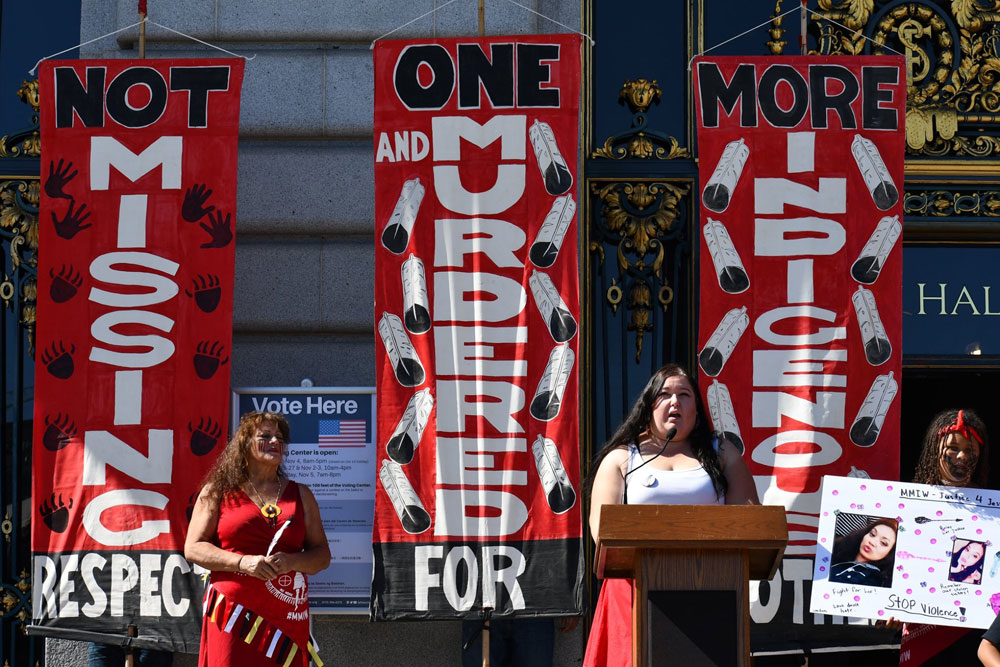 This article is the third in a series of articles published by NPQ, in partnership with the First Nations Development Institute (First Nations), that lift up Native American voices to highlight issues concerning environmental justice in Indian Country and identify ways that philanthropy might more effectively support this work.

When a South Dakota court gave a green light to the Keystone XL pipeline last January, it also opened the door to further abuse, rape, trafficking, disappearances, and murdering of American Indian women. Often philanthropy likes to create defined categories such as “environmental justice” or “gender justice.” But the real world of American Indians is not so neatly arranged.

In December 2019, I testified against TC Energy (formerly known as TransCanada) in South Dakota water board hearings on permits for the company’s use of water to build the Keystone XL pipeline. Although I do identify as a water protector, environmentalist, and land defender, I was testifying as something else—as an Indigenous survivor of trafficking.

Why? Because the pipeline’s “temporary” work camps (also known as man camps) are certain to bring a rise in violent crime, and gender and sexual violence, to the neighboring areas, which include several American Indian communities throughout South Dakota and Montana. While the water board sought to make decisions about water use, ultimately, they were making decisions about human lives—and whether or not a pipeline was worth widespread abuse, rape, trafficking, disappearances, and routine deaths of Indigenous women and children. In January 2020, they decided it was.

But this siloed approach does not reflect our realities. Philanthropy, if it wishes to support us, must understand how land-based gender and sexual violence affects Indigenous peoples and why the struggles to preserve our land and our bodies are two faces of the same struggle.

One of the most commonly understood ways in which environmental issues intersect with gender and sexual violence is in the rape, sex trafficking, and high rates of missing and murdered Indigenous women and girls (MMIWG) prevalent in areas where extractive industries are concentrated. A well-known example is the Bakken oil field of North Dakota and Montana, where rates of sexual violence dramatically increased after oil booms struck rural communities.

Our organization, Sovereign Bodies Institute (SBI), jointly published a report with Brave Heart Society on this issue and the potential social impact of the Keystone XL pipeline in late 2019, titled Zuya Wicayuonihan: Honoring Native Women. Among its findings: across the Dakotas, Montana, and Nebraska (where the pipeline is to be built), four-in-five MMIWG cases in counties impacted by Keystone are unsolved, 92 percent of unsolved cases were outside tribal jurisdiction, and one-in-five cases occurred in counties where the pipeline is to be built or where other pipelines already exist. Even more disturbing, the report states that across the region, Indigenous men who kill an Indigenous woman are 150 percent more likely to be arrested and convicted than white men who have committed the same crime, and only one in two white men who are suspected of killing an Indigenous woman are held accountable by the justice system.

As I shared in my testimony against the Keystone XL pipeline, these impacts are far-reaching and create a toxic social form of pollution that takes generations to clean up. Man camps associated with extractive industries can also bring an increase in drug trafficking and use, which can create even more violence.

One of the survivors who shared her story with us is part of a broader ripple effect of an oil boom she never witnessed. Her trafficker grew up seeing his mother sold to oil workers. From a very early age, he was exposed to the sex trade, drugs, extreme poverty, and systemic neglect from educational, juvenile justice, and child welfare systems. A great distance away, and over 20 years later, he was diagnosed with severe post-traumatic stress disorder (PTSD), struggled with substance abuse, had been incarcerated several times, and was perpetuating violence himself. The social impacts of extractive industries cannot be understated. It is a violence that is nearly impossible to contain and takes lifetimes to heal.

Environmental degradation also has a disproportionate impact on reproductive health in Indigenous communities. For example, Mavis McCovey recalled in her autobiography, Medicine Trails: A Life in Many Worlds, that herbicides the Forest Service sprayed on federal lands adjacent to tribal communities led to widespread miscarriages, and the communities did not have any births for years. As an elder and medicine woman, when she reported this violence to the Forest Service, she was told the miscarriages were probably due to meth use, not the herbicide. This herbicide was similar in composition to Agent Orange, and when its use was discontinued, women were able to carry babies to term again. Navajo women have raised similar concerns due to the impact of uranium mining on their territory, and Diné No Nukes, through their radiation monitoring project, mapped the health impacts of such pollution on Navajo women’s bodies in a powerful infographic.

Environmental degradation also has a powerful impact on community mental and emotional health, especially among Indigenous youth. It should not be a surprise that the destruction of sacred sites, customary gathering sites, and homelands has a negative mental health impact on Indigenous peoples—and yet this impact largely goes unacknowledged in discussions on social impact of environmental degradation. For youth, this is compounded by high rates of youth suicide and self-harm, victimization, lack of opportunity, and criminalization.

Simply put, the ongoing effects of colonization create a world that many Indigenous youth just don’t want to live in anymore. These effects include a lack of clean drinking water, surroundings riddled with toxic waste or extraction sites, extreme distance from resources for help, high rates of health problems like cancer due to pollution, and high rates of food insecurity. Centers for Disease Control data demonstrate that American Indian and Alaskan Native youth commit suicide at rates “more than 3.5 times higher than those among racial/ethnic groups with the lowest rates.”

To many, what American Indian youth face may sound like post-apocalyptic conditions, but they are the realities of many Indigenous communities, and our youth pay a disproportionate cost by growing up in a world where these conditions are made to feel inevitable. It stands to reason that kids are healthier mentally and emotionally when their surroundings are healthy, and yet environmental justice remains compartmentalized from efforts to protect and care for Indigenous youth.

All of these issues come together to create what may be the worst impact of environmental violence—an erosion of our land-based practices and identities as Indigenous peoples that creates a loss of what grounds us in who we are. These practices and traditions have teachings that work to prevent violence, and they are lost when we no longer engage with them in the ways we used to.

So how can philanthropy recognize this? First, funders must understand that efforts to address these issues are often crisis driven and urgent in nature. This means that Indigenous organizations doing this work need access to rapid-response funding and grant application processes that honor the time commitments and constraints of those who have the boots on the ground. Grant applications should not be overly laborious; those of us doing this work are serving communities in crisis with acute needs and are frequently put in the position of running constant triage.

For the same reason, flexible or general funding is most useful. Work addressing land-based gender violence is often fluid and shifts as community needs and priorities shift, and as the violence occurs over time. The funding supporting these efforts must also be able to shift with it. General funding allows us to make quick decisions while on the ground, respond to crises as they emerge, and cover costs of critical items that may not otherwise be covered by project-specific funding. For example, some of the MMIWG families we serve have acute needs that persist for years beyond the initial incident of violence. These needs have included emergency financial assistance in caring for children of missing or murdered parents, rapid response community support spaces after instances of violence, assistance in accessing emotional and mental health supports, and safety planning for runaway youth.

Situations like these have an additional teaching for funders—much of the work in this field is inherently confidential. The vast majority of our day-to-day workings as an organization are never shared on social media or in our promotional materials. This is because we are protecting survivor and client confidentiality. And this is done for many sound reasons. Among these are the fact that we are working to address violence that has ongoing criminal investigations, because in many instances the perpetrators are still in the community; because we are targeted for retaliation and harassment; because Indigenous communities have a right to keep their data and information on the violence they experience to themselves; and because our work is saturated in graphic stories and experiences of trauma, and it would be irresponsible to share that vicarious trauma with those not equipped to process it in a good way.

The majority of our work are things that could never be in a brochure or public report. Funders need to understand this and be willing to support our work without expectation of violating the confidentiality our work needs.

This brings me to my last point: this work is built entirely on relationships. Funders have to be discerning in which organizations they invest in and support, make an effort to build relationships with Indigenous organizations and communities, and uplift organizations that are led by those most directly impacted by the violence. In the case of work on MMIWG, for example, the issue has become a “hot topic” and hundreds of projects have emerged among nonprofits, grassroots organizing circles, tribes, universities and colleges, and research centers. While this topic understandably has a sense of urgency to it, funders must be willing to be intentional and deliberate in selecting which projects and organizations to work with, and support work led by survivors of violence and MMIWG families. The work that needs the most support is grassroots, boots on the ground, led by those directly impacted.

As survivors, we have critical expertise. And as community members, we have crucial relationships in place that make the work effective. We know better than anyone what the needs are and how to meet them, because they are our needs too.

Annita Lucchesi, Cheyenne, is executive director of the Sovereign Bodies Institute, a research institute dedicated to community-engaged research on gender and sexual violence against Indigenous people.

AAPI Women Leaders Speak Out: We Are Not Your Flavor of the Month