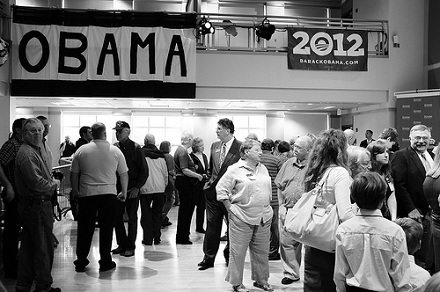 On the Harvard Business Review Blog Network, an interesting blog from Dorie Clark features some important points for all of us to ponder regarding our uses of social media in democratic action. Clark traces some of the lessons we can learn from observing the threads of the history of social media through recent political campaigns. She observes that the uses of cutting edge tools are powerful in the moment but the strategic advantage they give a campaign fades fast, as others adopt similar tools. She writes that, in 1996, a campaign could get media coverage simply for having a campaign website and that, in 2004 and 2008, the focus was on Howard Dean and Barack Obama for incorporating organizing tactics that made active use of social media. But as Clark points out, with online tools, the progress from novel to fashionable to completely unexceptional is a fast track.

Still, early adoption may still have some significant value; Clark points out that President Barack Obama, working on a base his team laid in the 2008 campaign, began November with 31 million Facebook likes to former Massachusetts Gov. Mitt Romney’s 11 million, and 21.5 million Twitter followers to Romney’s 1.6 million even though Romney had more than 100 staffers focused on digital strategies. A study released in August by the Pew Research Center’s Project for Excellence in Journalism revealed that that, in June, the Obama campaign was posting nearly four times as much content on almost twice as many platforms.

But Clark correctly observes that it is getting harder to control all the online activity going on around the campaigns. She cites a study by Bluefin Labs that she states found that “7 million public comments on Facebook and Twitter in response to television coverage of the conventions — 2.5 million of them in the final 90 minutes of the Democratic Convention.” Therefore, the narrative that builds in all of this is not directly controllable by campaign-driven “messaging,” though the campaigns still tried by tweeting for retweets and similar strategies.

But our favorite point in this blog is about the power of relatively cheap online organizing to trump big money. Writes Clark, “Just as Nancy Lublin suggested in her book Zilch: The Power of Zero in Business, corporations have a lot to learn from underfunded nonprofits, and the same is true of political campaigns. Great online efforts can thrive with creativity and brainpower, even sans capital.”

All of this is grist for the mill as we consider how the civil sector begins to take more control of the public narrative about the critical issues of our times. –Ruth McCambridge