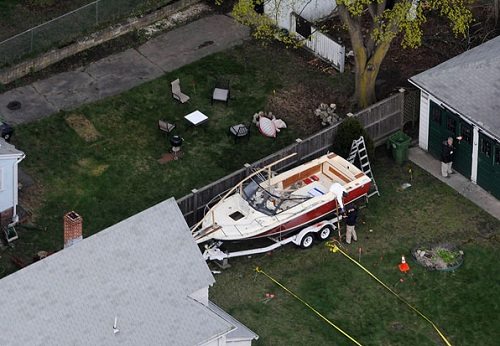 The bullet-riddled boat—now in federal custody—that once belonged to David Henneberry has become a flashpoint in the fundraising that followed the Marathon bombing. The boat was, of course, where the second suspect in the bombing had hid, and it was Henneberry himself who found him there.

The picture of the house and the boat was everywhere, showing that Henneberry’s house was modest, as the boat—a 24-foot Falcon dating to 1981. This meant something to those who love the water and their own boats, so a fund was established to replace Henneberry’s boat at a pricetag of $50,000.

Craig Dunlap of Texas launched the boat replacement campaign on Crowdtilt and the fund now has $50,170 in it (as of Thursday evening), but Henneberry says he does not want the money, telling WCBV TV, “It makes me feel wonderful that people are thinking like that, but it is my boat. People lost lives and lost limbs. I’d rather that [the money] go to the One Fund Boston. To buy me a new boat is a wonderful thing. I don’t want that, really. They lost limbs. I lost a boat.”

Ajay Mehta of Crowdtilt responded to the public criticism, “It wasn’t like this was the most important cause right now. It was more about reaching out with a hand of support to a man who was unwittingly thrust into the spotlight.” Mehta told Trade Only Today, “It’s not like fundraising or charity. It’s just people can chip in if they want to.”

Dunlap was not the only citizen to take the bull by the horns. According to the Watertown TAB, Sam Slater of the Slater Foundation has pledged $15,000 from the foundation. Slater is also putting on a benefit concert at the restaurant he owns this week with proceeds from the show going to One Fund Boston. Slater will match whatever is raised.

Henneberry is not engaging with the controversy, saying, “Slip Away is slipping away, but I say it did its job… It held a bad guy, and is going away like a Viking ship.”—Ruth McCambridge