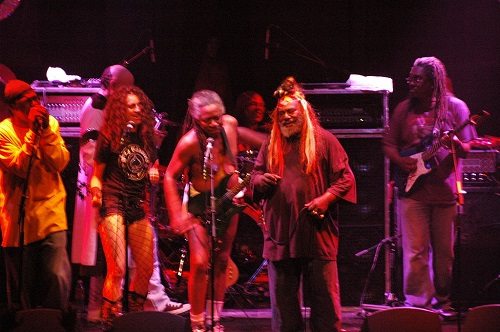 Here is another situation in which we want to celebrate interactivity in museum exhibitions, because if you click the link above you can see George Clinton’s Mothership be reassembled on the floor of the Smithsonian.

First, a musical interlude to remind you about why this moment is to be celebrated:

This Mothership is not the original—that one was, according to this report, sold by Parliament Funkadelic when they needed cash in 1983 amid a tumultuous period of disagreement and debt. But this one appeared in the mid-1990s in a series of large-scale shows.

At some point, the ship was stowed, but Clinton said the storage facility “was using it like a discotheque club. They’d turn [on the Mothership] on the weekends, and people would come and dance around—land it up and down all night long.” Some time after that, Clinton took it back to his studio in Tallahassee, Florida, where they carved out part of the ceiling to make sure that they could put its crown on.

“It’s the most iconic stage prop in African-American musical history, maybe even musical history of the past 40 years,” says Kevin Strait, project historian for the museum. “I really can’t think of anything that matches it in terms of its size and overall scope. It’s not necessarily the first thing that people think about when they think about the history of African-American music, but that’s one of the things that we’re trying to show here—that the shows’ pageantry was a central part of getting people to know, feel and understand the music.”

As they say, “Funk is it’s own reward. May I frighten you?”—Ruth McCambridge