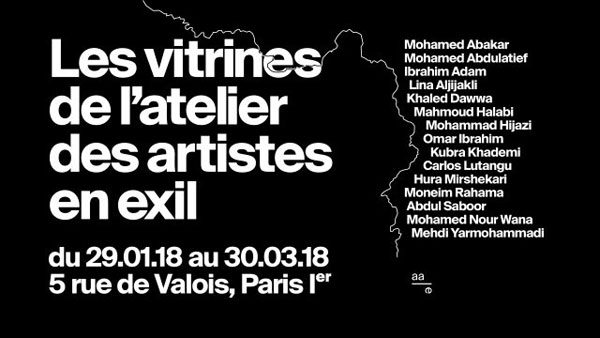 Paris has long attracted the world’s most celebrated displaced artists. Gertrude Stein opened her apartment. There was the Beat Hotel. Now, the Paris-based nonprofit Agency for Artists in Exile offers a home for refugees whose home countries, such as Syria, are no longer welcoming and, in some ways, no longer exist as they knew them. This is art made by a new wave of talent driven to Europe by war and poverty, unattached to the typical financial routines of the art trade.

Kate Brown, Artnet’s Associate Editor based in Berlin, writes about how the 15 artists are working out their experiences of exile through their art with support from the French Culture Minister. The artists are exhibiting their works for the first time in France in a show entitled, “Les vitrines de l’atelier des artistes en exiles” (“The windows of the studios of artists in exile”). Their work will be on view at the Culture Ministry’s offices until March 30.

“Culture in France knows no boundaries,” said Nyssen at the opening of the exhibition, challenging far right-wing figures like Marine LePen, who advocated during last year’s presidential elections for patrimoine, or traditional cultural heritage.

The agency’s dedicated space at 102 rue des Poissonniers hosts visual artists along with musicians, filmmakers, dancers, and poets. Since opening this past September, the studios have offered support to some 200 artists, but they still need a lot more assistance to provide what is needed, including equipment, art materials, and even food and housing.

NPQ reports regularly about the unprecedented influx of refugees in need of international protection, many coming to the European Union (EU) to seek asylum. At least for now, the EU has a legal, if not moral, obligation to protect those in need. There are other examples of refugee artists being welcomed and validated, such as in Germany. These positive initiatives help to frame all refugees as individuals with voices and creative expressions that have the right to be heard and seen rather than as collective identities to be managed.—Jim Schaffer