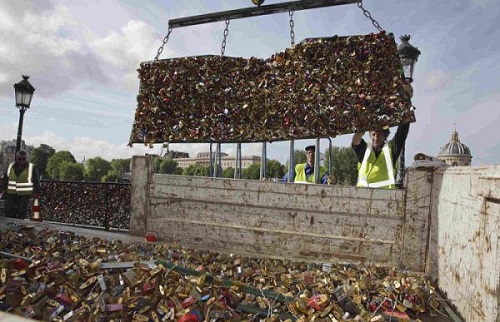 In a form of collective public art, millions of tourists visit the Pont des Arts Bridge in Paris with their significant others and leave locks inscribed with their initials before throwing the keys in the Seine. But art is never permanent, and is sometimes not deeply appreciated by those who have to look at it every day. Last week, the city took off the bridge’s hundreds of padlocks, weighing 45 tons, and replaced them with city-commissioned street art.

Locals largely saw the bridge as an eyesore, but the locks were not removed just for vanity. According to the city, not only were the locks, also found on Paris’s Pont de l’Archevêché Bridge, damaging the landmark sites, they were also a hazard: A part of the railing on the bridge had collapsed under their weight.

After considering the growing maintenance costs of removing the locks, which had outgrown the city’s capabilities, the decision was made to remove one of the city’s celebrated tourist attractions. But that doesn’t mean that the commitment to art on the bridge has been abandoned; in place of the locks, the city has installed temporary panels of commissioned street art put together by Parisian gallerist Mehdi Ben Cheikh.

Among the works Cheikh included is a piece by Franco-Tunisian street artist eL Seed, who mixes graffiti and Arabic calligraphy. eL Seed uses pink Arabic calligraphy to quote from 19th-century novelist Honoré de Balzac: “Paris is in truth an ocean; you can plumb it but you’ll never know its depths.”

Colorful work by other street artists, including French artists Jace and Brusk and the Portuguese Pantonio, is also displayed on the bridge. The city is planning on replacing the exhibition with Plexiglas later in the year. 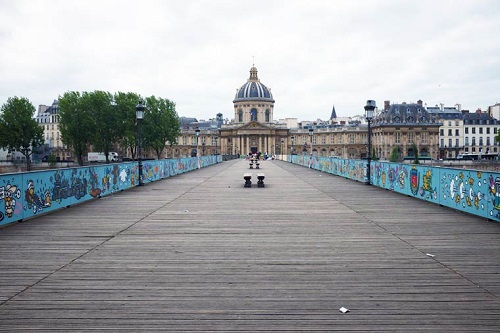 For several years now, the city has been discouraging tourists from adding more locks to the already overburdened bridge. While the Pont des Arts is by no means the world’s only location to bear “love locks,” it is the most famous, Paris itself being “the romance capital of the world.” The tradition has only been around in Paris since 2008, but has since spread to countries around the world, including China, Italy, the Czech Republic, and others.

What would appear a harmless, cutesy act has drawn both strong support and opposition. While some city officials saw the locks as embodying the spirit of the city, two Americans started a petition on Change.org calling for a ban on the practice. Lisa Taylor Huff and Lisa Anselmo call the tradition “destructive” and advocated for the locks to be removed to “return our bridges to their original beauty and purpose.” But despite the petition’s sentiments and the city’s intentions, tourists seem determined to continue the convention on other fences alongside the Seine, lock and key in hand.—Shafaq Hasan