Part of an Unbalanced Breakfast: Oxfam Exhorts Big Food to Do More on Climate Change 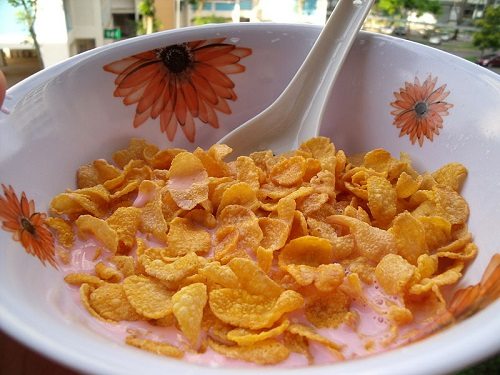 The latest report from Oxfam, “Standing on the Sidelines,” draws attention to the role of corporations like Coca-Cola, General Mills, Kellogg, Mars, Nestlé, and PepsiCo in aggravating global warming through their manufacturing processes and their unwillingness to speak out on issues related to climate change. Naturally, their emphasis is placed on those people in developing or Third World regions—“The poorest, most vulnerable people are being hit first and worst.” But to really bring it home to a Western audience, Oxfam is doing what provocateurs have done for a century: targeting our stomachs.

“In major markets like the U.S. and the UK, Oxfam calculates that climate change will drive up the retail price of products like General Mills’ Kix cereal by up to 24 percent and Kellogg Corn Flakes by as much as 44 percent over the next 15 years. Such retail price hikes are the consequence of rising prices of commodities like corn and rice, projected to double by 2030, with half of the increase due to climate change.”

Don’t have a taste for breakfast cereals? How about your morning coffee? “In Guatemala, rainfall shortages during peak growing seasons have caused serious harvest declines. […] Soaring temperatures destroyed up to 40 percent of Guatemala’s coffee harvests in 2013–2014, putting thousands of agricultural laborers out of work.” This means, according to Tim Gore, one of the authors of the study, “the very high-quality Arabica coffee beans that we like to enjoy will become more scarce and therefore more expensive.” Adding to this is a fungal disease called “coffee rust, which is devastating the coffee crop across the region.”

The group acknowledges some of the efforts taken by these Big 10 companies. Many have taken a stand, at least, against the use of palm oil from deforested regions. (The use of palm oil at all, however, is one of the big causes of deforestation, and though the companies have said they will stop, they have not made plans for implementation or holding others to account. The same techniques continue unabated to produce sugar and corn.) And all of them have made commitments to reduce their carbon footprint when it comes to their direct manufacturing operations—what are called “Scope 1” and “Scope 2” emissions. Oxfam notes, though, that the ancillary and secondary production effects that comprise “Scope 3” produce nearly ten times as many tons of emissions as the other two combined, and those aren’t covered by any of these promises.

Below is a chart from the report, reprinted by Mother Jones, comparing the Big 10’s policies for reporting and reducing agricultural emissions: 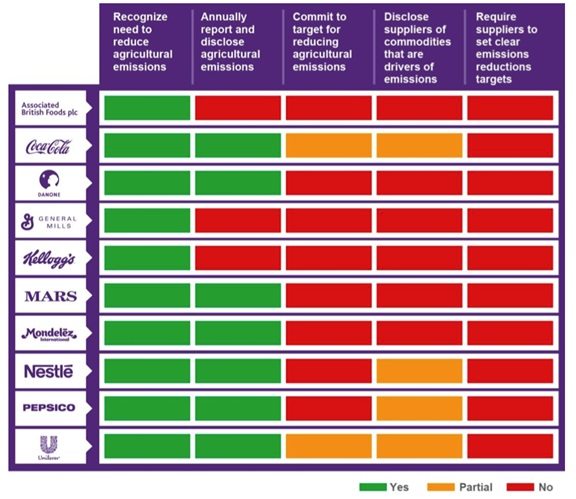 The conclusion to “Standing on the Sidelines” says “the food and beverage industry has both a moral imperative and a corporate responsibility to step up its efforts to tackle climate change. Oxfam calls on the ten largest food and beverage companies to “know and show their climate change emissions, including emissions in their supply chains  ; commit to quantifiable greenhouse gas emissions reductions; and advocate for ambitious action to combat climate change.”—Jason Schneiderman