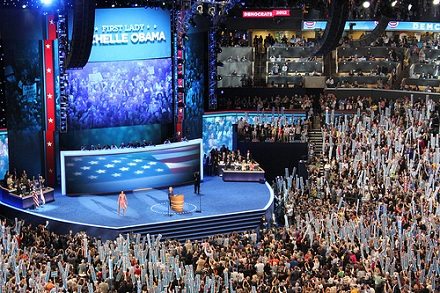 Despite the $37 million cost (not including outside events) of the convention, the Democratic convention in Charlotte, N.C. features even less suspense than the Republicans’ convention in Tampa, Fla. (which NPQ covered last week) unless the Democrats have a mystery guest comparable to the Republicans’ Clint Eastwood. It’s pretty certain that President Barack Obama will be renominated and Vice President Joe Biden won’t be replaced by Hillary Clinton. Equally certain is that there will be Party events at which people who want access to major political powerbrokers get it. If the Democrats retain control of the Senate or overturn the Republicans in the House, access counts. If President Obama is reelected, powerbrokers will want access to his allies and advisors who they might rub shoulders with here at nonprofit fundraisers.

As put by Public Citizen, “The party conventions host huge influence-peddling and fundraising events between those who want something from government and those in government who can affect those interests.” The Sunlight Foundation, which does a great job in tracking convention-related events, has counted over 400 gatherings in Charlotte. So long as members of Congress steer clear of House and Senate rules prohibiting them from attending events in their honor hosted by lobbyists, much of the partying might be to provide opportunities for invaluable face time with lawmakers and just about entirely legal.

The Democrats have prohibited contributions to the official Democratic convention committee from lobbyists, PACs, and for-profit corporations. However, the influence-buyers always find a way around the restrictions, and they did for Charlotte too, contributing to an affiliated nonprofit organization called New American City for various convention-related events. According to a Reuters article, businesses have also contributed through local foundations. The business and lobbyist contributions to support the convention, even if bypassing the official convention fundraising apparatus, are signals to the party powerbrokers of evidence of allegiance and support.

Lobbyists are still holding their parties, too, but offering finger food on toothpicks so that politicians can attend without running afoul of rules that prevent them from accepting full meals from lobbyists. Each day of the convention features a lobbyist-sponsored “Late Night Charlotte’’ party marketed as an opportunity for face time with members of the Democratic Congressional Caucus; taglines on the official convention website read, “This event will be produced to comply with Congressional Ethics rules.”

While there has been some press commentary about a lower turnout of Washington celebrities for the Democratic convention this year than four years ago due to their reduced enthusiasm for the president’s candidacy, some nonprofit fundraising events will be held with the occasional celeb or two showing up. For example, the rapper Common will be headlining a fundraiser for Musicians on Call, described as “a group that makes music available to wounded U.S. service men and women.” Actor Jeff Bridges will be singing with his group, The Abiders, with Maryland’s Democratic Gov. Martin O’Malley as a sideman, as part of a charity fundraiser for the Share Our Strength No Kid Hungry campaign. Actress Sheryl Ralph is co-hosting a fundraiser for the Moriah Hemingsway Health Foundation, described as a charity that helps provide health services to uninsured North Carolinians. General Wesley Clark is the featured speaker at a fundraiser for the Echo Foundation, a peace and justice foundation with Nobel laureate Elie Wiesel serving as honorary chairperson.

A few gatherings are highbrow discussions rather than blowout parties, such as the panel discussion on changes needed in the U.S. system of higher education, sponsored by the Lumina Foundation. The United Nations Foundation program on the calendar searches for ideas that will help strengthen the U.N.’s global problem-solving. Like its program in Tampa, the Council for Economic Education has a discussion scheduled on financial literacy.

In some instances, the charity events in Charlotte may attract a different cast of nonprofits than those that tried to sway rock-ribbed conservatives in Tampa. For example, the Bureau of Indigenous Muslim Affairs (BIMA) has gatherings scheduled in Charlotte, though they weren’t endorsed by the convention organizers as official events. BIMA has been trying to get both parties to deal with their charges about invasive practices under the PATRIOT Act, zoning discrimination against mosques, and general attitudes of Islamophobia. After protests by right wing groups such as Operation Save America, DNC representatives removed the BIMA events from the official convention schedule with the explanation that they were posted as user-generated items and didn’t really belong on the convention website.

In contrast to the BIMA presence, the most significant religious nonprofit event in Charlotte may happen on the convention floor on Thursday night. After giving a blessing at the Republican National Convention, Cardinal Timothy Dolan, sometimes referred to as the “Pope of America,” will deliver a blessing at the Democratic convention. This comes after last night’s convention speech by Sister Simone Campbell, known for her association with the “Nuns on the Bus” social justice campaign. Given Dolan’s vocal Church campaigns against marriage equality, abortion rights, and provisions of the Affordable Care Act that the U.S. Conference of Catholic Bishops sees as a threat to religious freedom, the Cardinal’s presence will likely be a major topic at the Catholics United event at the convention. Catholics United has been highly critical of the Catholic Bishops’ public policy positions on the above social issues.

“Lobbyists and special interests aren’t going to be spending their money to promote and support events like this out of altruism and the goodness of their heart,” one commentator recently told ABC News viewers, and that commentator should know; those words of wisdom came from lobbyist Jack Abramoff, who you’ll recall was convicted of fraud, conspiracy and tax evasion in relation to a Native American lobbying scandal. Abramoff’s newfound candor comes after his having spent 43 months in jail.

Rather than attending nonprofit fundraisers out of a sense of altruism, Abramoff says, “They’re doing it because they have an agenda. They may be good agendas, by the way, but they’re still agendas that are fed by an improper use of financial resources in a way that tilts it away from members deciding things only on their merits.” As a skilled practitioner of the dark arts of the lobbying industry, Abramoff knows that spending money at a nonprofit event works just as well as at any other venue if the result is access. “Virtually every interaction that a lobbyist has with a congressman is money well spent, from the lobbyist’s point of view,” Abramoff says.

Money was well spent in Tampa and will likewise be flowing at the Democratic convention to promote agendas with powerbrokers in Charlotte. The price tags for getting into the nonprofit events in Charlotte seem to be more affordable than some of those held for the Republicans in Tampa, but the principle is the same. When moneyed interests take advantage of nonprofit fundraising events simply to sweet-talk political leaders, public disclosure of corporate lobbying and influence peddling takes a hit. Why not have a pledge right now in the name of protecting democracy and public disclosure: every corporate leader and every lobbyist that pays to attend a nonprofit soiree at the convention, and every political office-holder and powerbroker who also shows up, should be publicly disclosed so that the American public gets to see specifically which moneyed interests were able to flit toward which politicians. Even if they don’t exchange promises or favors, the public deserves to know when corporate or union leaders get to shimmy up to the legislators and government executives they might want to influence.