People as Pendulums: Institutions and People with Intellectual and Developmental Disabilities 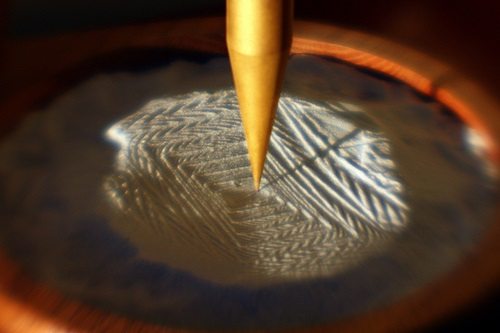 In 1965, then-Senator Robert Kennedy toured the Willowbrook institution in New York State and offered this grim description of the individuals residing in the overcrowded facility: “[They are] living in filth and dirt, their clothing in rags, in rooms less comfortable and cheerful than the cages in which we put animals in a zoo.”[i]

The atrocities of Willowbrook ushered in a generation of advocates, nonprofit organizations, providers, and professionals who successfully pushed for massive reform, beginning in 1971 with the development of Medicaid Intermediate Care Facilities for Persons with Mental Retardation (ICFs/MR), later renamed as ICFs for Individuals with Intellectual Disabilities (ICFs/IID).

Families and advocates alike applauded this infusion of federal funding, licensing, and oversight for a program specifically designed to meet the needs of individuals with intellectual and developmental disabilities (I/DD).

Still, as the ICF/IID program grew, so did calls for housing alternatives. Critics emerged, claiming that the ICF/IID federal standards of care promoted a non-individualized, inefficient model of care, and, due to federal financing incentives, discouraged states from developing alternate service options.[ii] In 1981, Congress responded by providing for small (4-15 person) ICFs/IID and a Medicaid Home and Community-Based Services (HCBS) waiver, to allow states to “waive” certain ICF/IID requirements.

These early reforms were quite properly motivated by the need for a system of care and supports that responded to the very individualized and diverse needs of the entire population of people with I/DD. These reforms, however, also set the stage for decades of ongoing deinstitutionalization, resulting in the elimination of specialized housing, employment and education options for people with I/DD, leaving some to question the price of “progress.”

Even though initial reforms were motivated by a lack of service options (an over-reliance on the ICF/IID program), it was not long before efforts to “rebalance” our system of care shifted from the expansion of options to the dramatic reduction of ICFs/IID and other specialized options.

In 1999, the Supreme Court handed down its landmark Olmstead v. L.C. decision, which should have settled the deinstitutionalization debate. The Court expressly cautioned against forced deinstitutionalization, the “termination of institutional settings for persons unable to handle or benefit from community settings,”[iii] finding instead that the Americans with Disabilities Act (ADA) only requires community placement when an individual’s treatment professionals determine community placement is appropriate, such placement is not opposed by the individual, and the placement can be reasonably accommodated, taking into account the resources available to the State and the needs of others with disabilities.[iv]

However, masterful messaging by nonprofit organizations and federally funded lawyers with mission statements and funding aimed squarely at eliminating all “institutional” options quickly (and incorrectly) characterized Olmstead as a deinstitutionalization “mandate” requiring “community integration for everyone.”[v]   While deinstitutionalization proponents had successfully closed many ICF/IID homes by 1999, the time of the Olmstead decision, the decision has only further fueled their efforts in the years that followed.

Has the Pendulum Swung too Far?

According to Samuel Bagenstos, former Principal Deputy Assistant Attorney General in the Obama Justice Department’s Civil Rights Division and a key litigator in deinstitutionalization cases, the population of state institutions for I/DD now stands at approximately 16 percent of its peak.[vi]

The exit of ICFs/IID from the service landscape created a vacuum that lured nonprofit and for-provider providers into the business of human services. Between 1977 and 2010, the number of residential settings that served people with I/DD increased by a remarkable 1,598 percent, with most of these new settings being small and privately operated. In 2010, non-state agencies served 98.5 percent of people living in places with 6 or fewer residents. The number of home and community-based services recipients outpaced residents receiving specialized Medicaid licensed ICFs/IID by 676.1%, while the number of people receiving ICFs/IID care decreased by 63 percent.[vii]

As early as 1993, then-U.S. Rep. Ron Wyden (D-OR) pointed to the problems created by an unchecked expansion of providers rushing in to fill a need. “Increasingly, millions of Americans with these life-long handicaps are at risk from poor quality of care, questionable and even criminal management practices by service providers, and lackluster monitoring by public health and welfare agencies,” wrote Wyden in a March 22, 1993 report in his capacity as Chairman of the Subcommittee on Regulation, Business Opportunities, and Technology of the U.S House Committee on Small Business.[viii]

In 2000, the American Prospect magazine reported similar problems in its article, “Neglect for Sale,” which investigated a disturbing trend of large for-profit corporate providers capitalizing on the then-$22 billion (now more than $40.5 billion) in government spending on services for people with disabilities, turning care for individuals with I/DD “into a major growth industry.”[ix]

“It should not be surprising,” Bagenstos wrote, “that the coalition of deinstitutionalization advocates and fiscal conservatives largely achieved their goal of closing and downsizing institutions and that deinstitutionalization advocates were less successful in achieving their goal of developing community services.”[x] State officials were not keen on investing in the development of adequate community services after being told closing ICFs/IID would save them money, resulting in inadequate funding and compromised care. Bagenstos acknowledges adequate investment in community services, especially due to the cost of quality staffing, will meet or exceed the cost of ICF/IID care.[xi]

These outcomes are made all the more tragic due to their predictability. The failed deinstitutionalization of the mentally ill should have been an important lesson learned. “As events played out, large state institutions [for the mentally ill] were indeed shut down in the 1970s, but the promise of high-quality community-based care collided with the fiscal cutbacks of the 1980s,” wrote Eyal Press, author of “Neglect for Sale.”[xii]   Homelessness, incarceration and violence raise questions about “whether society’s concern for the constitutional rights of people with mental illness has led to their abandonment.”[xiii]

Predictable Tragedies as the Price of Progress

Even if some license is afforded to “hope”—a “hope” that history would not repeat itself when deinstitutionalizing individuals with I/DD—there is no excuse for continuing down a path that has in its wake repeated, widely reported tragedies in small settings for people with I/DD.

More than 150 media reports in more than 30 states since 1997 reveal systemic concerns in small settings for people with I/DD, including deaths, abuse, neglect, and financial malfeasance. In November 2011, the New York Times wrote that more than 1,200 people with I/DD in the past decade have died in group homes due to “unnatural or unknown causes.”[xiv] U.S. Senator Chris Murphy (D-CT) has called for a U.S. Department of Health and Human Services Office of Inspector General investigation to “focus on the prevalence of preventable deaths at privately run group homes across this nation and the widespread privatization of our delivery system.” [xv]

Georgia offers a particularly poignant example of the extremes by which “success” is defined by proponents of forced deinstitutionalization. An October 2012 federal settlement calls for the transition of its I/DD residents from ICFs/IID to community settings. In 2013, the state’s own reports showed that 10 percent (40 people) of those transferred to community settings in 2013 had died.[xvi]   Yet, United Cerebral Palsy, a national nonprofit organization, ranked Georgia fourth in the nation for its successful community inclusion of people with I/DD.[xvii]

Other symptoms of failed deinstitutionalization are less obvious, but no less harmful to people with I/DD. Waiting lists for I/DD services now number nearly 317,000 people,[xviii] emergency rooms have become de facto urgent care clinics for people with I/DD, and correctional facilities are replacement treatment centers for some individuals who experience both mental illness and developmental disabilities.

Conclusion: Why does this continue?

The original goal of deinstitutionalization, to provide opportunity to individuals not appropriately institutionalized and “rebalance” the system, was shared by advocates.

We have passed the 50 percent mark in most states—that point of “balance” when half the Medicaid funding for people with I/DD was spent on HCBS options and half on facility-based (“institutional”) options. In fact, the United Cerebral Palsy reported that “38 states now meet the 80/80 Community standard, which means that at least 80 percent of all individuals with ID/DD are served in the community and 80 percent of all resources spent on those with ID/DD are for community support.”[xix]

As advocates marched toward “balance,” and in most states exceed it, tragedies followed and seem to be more widespread. These tragedies, which should have been a wakeup call, have done nothing to stem aggressive deinstitutionalization. State-level fiscal conservatives still loathe spending money, yet safely serving people with complex needs requires adequate funding. Proponents for “community integration for everyone”—advocates, nonprofit organizations, federal agencies and providers—have a lot at stake, past and present. To change paths now is to admit failure and risk future funding.

Lost in this debate is concern for the individual. Person-centered planning, which is held up as the ideal by advocates, nonprofit organizations, and government alike, is short-changed by system-change advocacy to eliminate specialized care options for those who need it. Instead, we must figure out ways to meet individual needs versus wholesale approaches to providing care that end up being as bad as or worse than having an institution as the only option.

The legal framework is in place to support individualized care and choice. Advocates must set aside efforts to eliminate options of care and work together to expand options. This begins with a commitment to serving each individual: true person-centered planning.

[v] U.S. Department of Justice, “Olmstead: Community Integration for Everyone”

[vi] Samuel R. Bagenstos, The Past and Future of Deinstitutionalization Litigation, 34 Cardoza L. Rev. 1, 29 (2012); see also at 7: “Since that time, states have closed hundreds of their institutions, and they have downsized others.” Note: The decline in the population of psychiatric hospitals for individuals with mental illness is even more dramatic, with current resident populations at just 9% of its highest numbers.

[xi] Id. at 43; compare, Kevin Walsh, et al, Cost Comparisons of Community and Institutional Residential Settings: Historical Review of Selected Research, Mental Retardation, Vol. 41, No. 2: 103-122 (April 2003)(“Findings do not support the unqualified position that community settings are less expensive than are institutions and suggest that staffing issues play a major role in any cost differences that are identified).

Tamie Hopp is the Director of Government Relations & Advocacy with VOR, a national nonprofit organization advocating for high quality care and human rights for people with intellectual and developmental disabilities.