Forms as Theory of Change 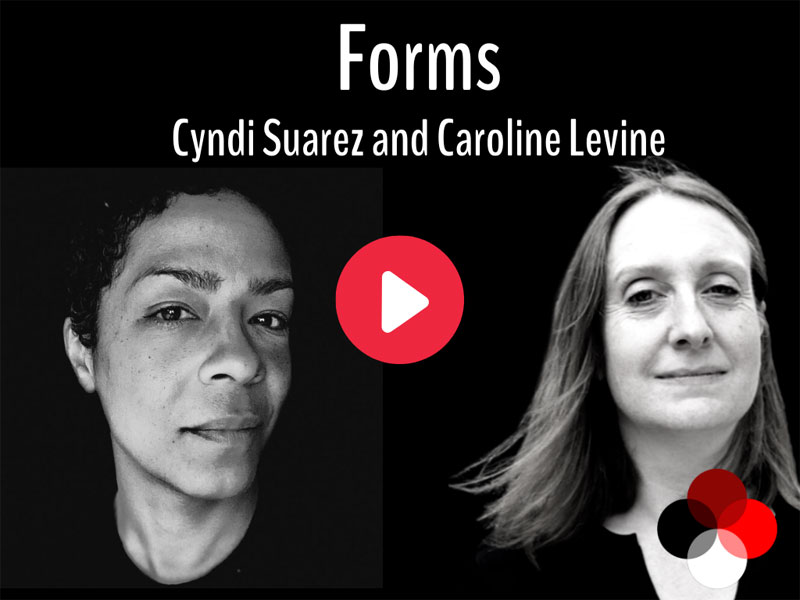 Cyndi Suarez, Editor in Chief of Nonprofit Quarterly and founder of Edge Leadership, invited Caroline Levine, author of Forms: Whole, Rhythm, Hierarchy, Network and Professor of English at Cornell University, to talk about the relationship between forms and civic infrastructure.

In this introductory clip, Suarez sets the stage for how the concept of forms has influenced her thinking on social change, and Levine describes how she came to think about forms, from the perspective of literary studies, as a strategy for social change.

Cyndi Suarez: I want to take some time to talk about forms, and how you got to this concept that, I think, became a breakthrough concept in terms of your work being seen as really influential. And…it’s funny, because when I remember looking up “forms,” and—I know this is probably not a fun thing, but, when there are critiques on your work, you know you’ve made it, right? And we’re at the point where people have, like, critiques of “form.” So, form is obviously a really important concept that’s kind of traveled, because it is so universal, elegant, and allows us to talk about a lot of things in a coherent way.

One of the things that I think about in terms of this is that when you go higher levels up, you get to this point where the things you talk about actually impact more things, and I see forms as one of those kinds of concepts, and so it is one of my favorites, as someone who spent a lot of time with organization development in the sector, movement building, all kinds of participation in facilitation spaces—areas of contestation in social change and social movement work. So, when I saw this concept of forms, it really, to me, brought together a lot of things. Not just those forms, but even identities, and anything that holds a structure together at whatever level, right? It’s the term that I use and love a lot; it’s the one that people always ask me about. So, can you tell us, how did you come to this beautiful term?

Caroline Levine: Absolutely. And actually, you set that up really beautifully, Cyndi, because I’ll tell it as a story—a kind of simplified story—where, once upon a time, and if you took English classes, back before 1990, you’ll remember how we used to treat this term “form.” Which is to say, we looked at the shapes and the patterns of literary texts. And you might have taken an art history course where that was true too, right? Where you would look at the composition, and you would look at the play of light and shadow in a painting, or you would look at, in a poem, the meter. And those were the forms of literary texts.

And then, especially in the 1990s, people came along, and they were like, “That doesn’t have enough to do with our social lives,” right? That’s this kind of focus on just the way that art objects work, but it doesn’t help us think about power, it doesn’t help us think about, you know, how do we live together better than we do? How do we get social change? And so, I’m part of a generation of people who are trying to bring together that earlier work on what literary and artistic forms are with the question of social change and how do we live in societies.

And what I thought I could do, and started to experiment with, was taking that method for understanding how forms are overlaid on top of each other to the ways that we’re organized in the social world. So, the fact is, all of us, as we go through our lives, have schedules, different kind of temporal patterns that are overlaid, right? Maybe you take your medicine at a particular time of day, you show up to work at another time of day, you expect to turn on the television at a particular season and find a new episode, right? Our worlds are organized temporally.

But then they’re also organized by spaces—like we’re all now in the Zoom COVID moment in our own little separate cubbies, right? And we’re not in public spaces, but we move in different shapes of spaces, in different patterns of time. And so, it was thinking, “Can I use the same kind of analysis of these different ways that we’re shaped all the time in the social world that I learned from reading literature?”

In this video, Levine details the four forms she focused on: whole, rhythm, hierarchy, and network. She explains how some of them have bad reputations, perhaps unjustly, and what might be the underbelly of the forms known to be democratic.

Cyndi Suarez: You pick four forms to go into and say are the most critical ones, and I love simplicity. So, I wanted to hear how you landed on those.

Caroline Levine: The book has four major chapters, and each one is a form: Whole (that’s W-H-O-L-E, as in bounded spaces or shapes), Rhythm (patternings of time), Hierarchy (that is, vertical orderings, rankings in terms of importance), and then Network (which is any kind of connective form, any kind of pathway that connects, any set of pathways that connect multiple pieces together).

I chose those four for one reason that has to do specifically with my field, which is that those are all forms that have a real prominence in studying works of art, as well as in studying the social world, so they cross over, back and forth, between them. If you think about rhythm, we study rhythm in music, we study rhythm in poetry, but we also, in the social world, we have laboring rhythms. We have rhythms of work and sleep, right? You can cross between the social and the aesthetic and the world of the arts with each of these forms.

Wholes are like national boundaries—these containers—and we’re always thinking about, how do you break free from them, right? So, wholes are bad. And hierarchies are bad, right? They organize us in unfair, unjust rankings. And rhythms and networks seem like they’re much more about freedom and about expression. But what I discovered in my book that—I didn’t start out with this idea, but it ended up organizing the book—was that actually they all have both affordances. They both afford both justice and injustice. If you think about…hierarchy’s a great example, I think, because I only had negative associations with hierarchy, and this is something that Cyndi and I have talked about. But if I say equality is better than hierarchy, that’s actually a hierarchy, right? I’m actually establishing that equality is better than the hierarchy. So, I think anytime we assert our values, we think about what values might organize us, we’re actually hierarchizing.

So, I tried to distinguish between social hierarchies—that is, hierarchies of groups, whereby people are put in boxes that are lesser and higher and lower—and other kinds of hierarchies, which might actually coordinate or make easier certain kinds of organization. And that’s something where I think Cyndi and I are really both super interested in that question. If hierarchy didn’t come with rewards, it might be a different thing, right? And similarly, networks, you know, people think of them as these free, sprawling things, but actually, they have pretty strong principles of organizing us. And they’re sometimes quite constraining.

I was reading some really fascinating and disturbing work about the ways that in the 19th century, slave drivers used to use the rhythms of song to try to make enslaved people work at a particular rhythm, right? So, we think “song=good,” right? “Rhythm=good.” No! Oppressive, exploitative, right? Exactly the wrong kind of use. So, I wanted to think about how each of these forms has these many possibilities. And that when we go—and this is what I didn’t get to in my book and what I’m writing about now—when we go to design or build lives for the better, how should we think about how forms play a role? We’ve spent so much time, I think, both in progressive movements and also in the arts, thinking about breaking forms, but maybe we could put them to use for justice. And that’s been my real question. (And, for change!)

Edge Leadership began in 2020 with a series of in-person and online convenings. This article and multimedia story series features the thinking of Edge Leaders. Follow these talented, sector-crossing, forward thinking social change agents at @EdgeLeadership2020 on Instagram, via NPQ’s channels, and by joining our closed 500-seat platform experiment.