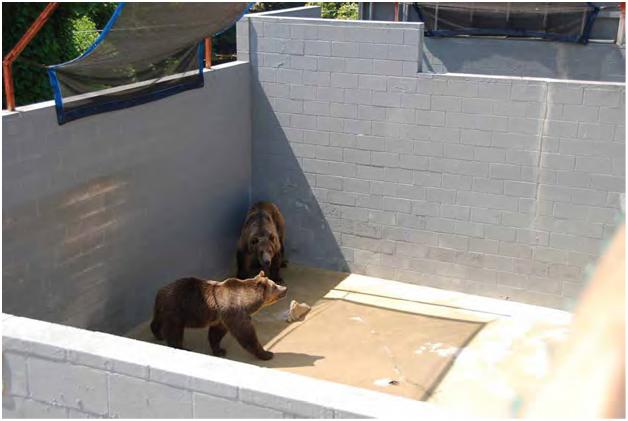 Sometimes, it seems that even the smallest and most obvious points of reform can take years of heavy lifting and multiple groups handling the job. So the donor who gave $450,000 to relocate eleven bears after he bought them from a now shuttered roadside zoo was doing one of the last necessary things in a long campaign in protest of the deplorable conditions where bears had been kept inexhibitions in North Carolina. They have now been moved from the concrete pits and cages in which they had been kept at Chief Saunooke Bear Parkin Cherokee, North Carolina, to the International Exotic Animal Sanctuary in Texas. The conditions that the bears were being kept in were highlighted in a horrifying PETA report in April 2010.After years of organized protests, the USDA finally closed the zoo, and the bears are now ensconced on real land in Texas where they join other abandoned or abused bears at the IEAS.

The Executive Director of IEAS described the bears’ new home:“[E]ach habitat is over one acre in size and provides the resident bears with a natural home, complete with innumerable trees to climb, brush and thickets to venture through, and even ponds and water tubs where they can cool off. The team placed 2.5 miles of piping and put up 1.5 miles of fencing to prepare space for these bears and they are responding well. They are already forming companionships with each other.”