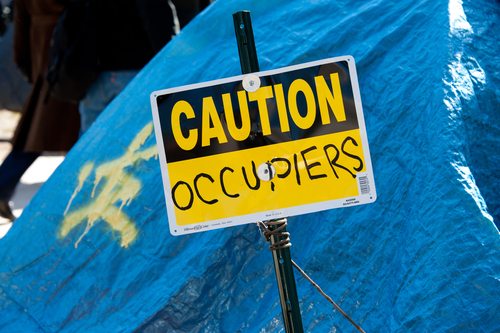 When does wearing the trappings of your job—or former job—to a social movement protest violate the unwritten rules of your former employer? Retired Philadelphia police captain Ray Lewis wore his uniform to an Occupy Wall Street gathering in Zuccotti Park last year.  According to the Daily News, Lewis, who “makes sure to tell people he’s retired…wanted to show the world that the economic-equality movement is not just the pink-haired potheads and scatteredbrained anarchists that some media outlets tend to focus on.”

The Philadelphia Fraternal Order of Police wasn’t happy with the retired captain. Willing to defend police officers charged with all kinds of nefarious actions, the FOP not only doesn’t want to defend Lewis—who doesn’t seem to have been charged with anything—but wants Lewis “permanently expelled from the FOP and stripped of union benefits such as life insurance and free legal assistance.” For Lewis’s offense of wearing his uniform, FOP pension director Henry Vannelli made a motion, supported by union president John McNesby, to file a grievance against the retired captain. “We don’t want that guy around,” Vannelli said.

Are you as infuriated by the McNesby/Vannelli grievance against Lewis as we are?—Rick Cohen