Piereson: Death to New Deal and Democrats Is Imminent 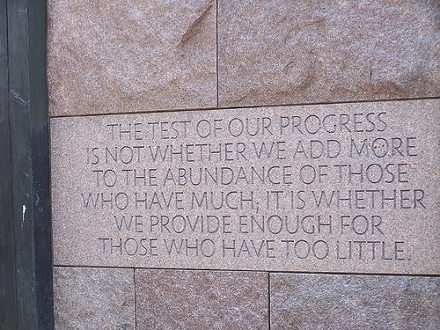 James Piereson of the William E. Simon Foundation is one of the more acclaimed thinkers in conservative philanthropy. In this essay, he suggests that the U.S. “has been shaped by three far-reaching political revolutions: Thomas Jefferson’s ‘revolution of 1800,’ the Civil War, and the New Deal,” and that now we’re on the brink of a new revolution. In contrast to the fears of people who Piereson thinks anticipate a period of decline for the U.S. in which it will cede its position as the world’s most powerful and prosperous nation-state, Piereson thinks that “in the decade ahead, Americans will struggle to forge a governing coalition that can guide the nation toward a path of renewed growth and dynamism.”

In each of the three cases Piereson describes as political revolutions, previous governing elites were discredited and replaced. In each case, the relationships between the major political parties had become hostile, broken, and without possibilities of compromise. Although the Democrats have by and large dominated politics since the New Deal (with most Republican presidents during that period committed to maintaining New Deal programs, just running them more efficiently than the Democrats), Piereson believes the core of the Democratic regime—big public spending—is over and ready to fall apart “for the following reasons: (1) unsustainable debt; (2) public promises that cannot be fulfilled; (3) stagnation and slow growth; and (4) political paralysis.”

He contends that “trade associations, educational lobbies, public employee unions, government contractors, ideological and advocacy organizations, health-care providers, hospital associations that earn revenues from Medicare and Medicaid programs, and the like…concerned with the distribution of resources rather than with the creation of wealth…[and] willing to invest large sums in lobbying and election campaigns in order to protect their sources of income… operating collectively, can block any overall effort to cut spending or to address the problems of deficits and debt.” In other words, he argues, these “rent-seeking groups” (and the Democrats as the party captured by rent-seekers) dampen economic growth and wealth creation.

The paralysis around debt and growth—and public spending and tax increases—will lead to a crisis, Piereson writes, which he believes could unseat the Democrats: “based on the evidence of the three previous revolutions, American voters are unlikely to support for very long any party that fails to enhance their standard of living or the nation’s position in the world.” Obama, he argues, has made things worse on all counts. Citing President Obama’s “ramming” the stimulus and health care legislation through Congress on highly partisan votes, Piereson contends that Obama—“a modern day Adams, Buchanan, or Hoover”—“destroyed the comity between the parties.”

This notion of a bipartisan-oriented, Tea Party-influenced Republican Congress is a new one to us. While we search for these ecumenical Republicans, we can imagine what Piereson thinks the nonprofit and philanthropic sectors have to do in the revolution: push for public policy alternatives to the debt and public spending, and otherwise stimulate charitable solutions to community problems in place of the public spending demanded by the “rent-seekers.” We look forward to Piereson making this point with his philanthropic colleagues at the Council of Foundations, which is largely comprised of proponents of the public spending favored by those nasty rent-seekers. –Rick Cohen