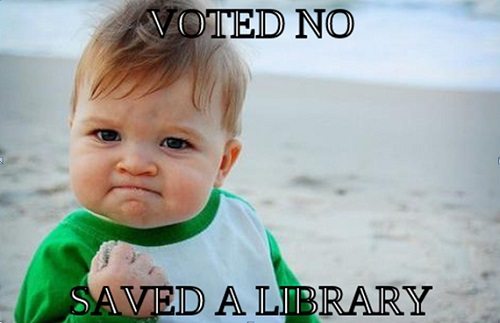 On Saturday, voters in LaFourche Parish in Louisiana rejected by about a five-to-four margin a ballot initiative that would have cut funding to the library to finance new jail construction.

“It really woke us up when we realized that the library would be defunded to build a jail,” said John Chrastka, the executive director of EveryLibrary, but he might not have been aware of the referendum if Lafourche Parish council chairman Lindel Toups had not shot his mouth informally in public off in a racist rant.

“They’re teaching Mexicans how to speak English,” Toups told the local Tri-Parish Times. “Let that son of a bitch go back to Mexico. There’s just so many things they’re doing that I don’t agree with…. Them junkies and hippies and food stamps (recipients) and all, they use the library to look at drugs and food stamps (on the Internet). I see them do it.”

Later, Toups claimed not to recall his comments when he was talking to Raw Story, saying “that little writer [Tri-Parish Times reporter Eric Besson] just wanted to make a name for himself.”

“I did say that Mexicans were good workers,” Toups said. “I respect Mexicans and blacks. I work with them all the time.”

Toups was also, by the way, the chief proponent of an anti-sagging pants ordinance.

EveryLibrary is a national organization designed to increase voter support for libraries. Chrastka mobilized his masses, which included a lot of angry librarians and library aficionados. Apparently, more than half of the residents in Lafourche Parish hold library cards. So EveryLibrary launched a social media campaign to reach the 55,000 people with Facebook accounts in the parish, stopping in its tracks the referendum that would have taken $800,000 of a $3.5 million special library tax and moved it to the creation and upkeep of a new parish jail.—Ruth McCambridge