After weeks of being subject to attacks and allegations from conservative groups, supporters of Planned Parenthood have chosen to display their displeasure by making donations to the organization in the name of some of the group’s most prominent adversaries.

This recent bout of donor pranking began in response to a comment from Republican presidential candidate John Ellis “Jeb” Bush, who said that he wasn’t certain that women’s health issues merited $500 million in federal funding, a statement he had to swiftly walk back. Later, on the Tuesday following, Planned Parenthood of the Rocky Mountains received a $25 donation in the name of Jeb Bush.

This tickled Twitter sufficiently that various Internet wags, including designer Mike Monteiro, took up the banner and suggested others should do likewise, donating to PP in the name of such stalwart Republican names as Marco Rubio and Rick Santorum, along with Donald Trump and David Daleiden, founder of the Center for Media Progress that has been at the epicenter of Planned Parenthood’s recent woes.

Remember, you cannot reason fools out of a place they didn’t reason themselves into. You can, however, donate to PP in their names.

The Washington Post reached out to the national headquarters of Planned Parenthood to gauge the impact of these protest gifts. Here’s what representative Liz Clark listed for donations to the national organization in the names of 2016 Republican presidential candidates: 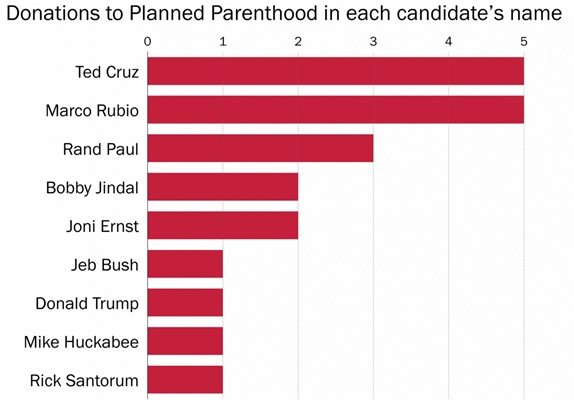 Only about twenty donations are recorded above, most of which were $100 or less, but that doesn’t account for similar gifts to local chapters.

“The benefit of having been a women’s health care provider for 99 years, and to being somebody who’s been there in the lives of one in five American women, is that when people come after Planned Parenthood, people tend to not like that, and it actually has the opposite effect…More people send money, more people ask what they can do to help, more people come to us for health care.”

Donating to controversial groups in the name of their opposition is nothing new, and it does demonstrate the power that backlash can have when generating funds. Attracting ire from the right people can mobilize supporters out of apathy and toward your cause. Though one imagines that Planned Parenthood would rather not face the difficulties of nonprofit stings and senatorial defunding attempts, the knowledge that adversity can spur action must provide some comfort.—Jason Schneiderman