Pokémon Go…to the Opera? How Nonprofits Have Made the Game Their Own

Pokémon Go has taken the mobile gaming world by storm, bringing its millions of users seeking to “catch ’em all” out into the streets to explore and hunt Pokémon. The new mobile app allows players to virtually catch Pokémon in public locations by using GPS technology to track where they are and how far they have traveled.

There have been some safety concerns around distracted users experiencing this new augmented reality creating unsafe conditions, especially while in vehicles. But, for the most part, the new mobile app is increasing mobility in its players, encouraging them to get out and visit new places in their neighborhoods.

Since the mobile game’s launch early this month, its popularity has skyrocketed. Pokémon Go is estimated to be on five percent of smartphones, while the popular dating app Tinder is only on two percent. If this trend continues, Pokémon Go daily active users could soon surpass social media giants like Twitter: 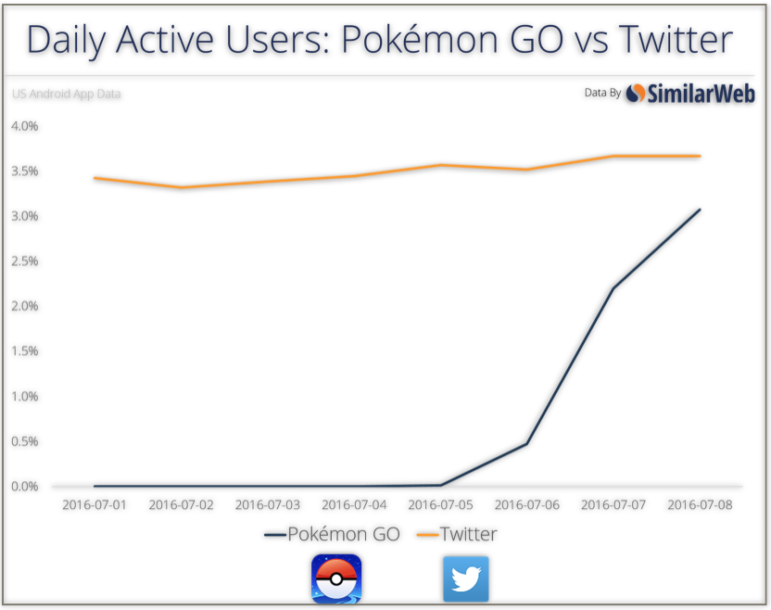 Many of the Pokéstops and Pokégyms in the game to which users are currently flocking are located at public places such as parks, churches, art installations, historical markers, and museums. This gives these organizations a unique opportunity to take advantage of new visitors as well as reach a younger audience.

One interesting way a food bank started taking advantage of the Pokémon Go app is by engaging new volunteers. The Food Bank of Contra Costa posted this on their Facebook page when they noticed some volunteers discussing a nearby Pokégym:

This also raises a great opportunity for churches that are struggling with bringing millennials in. Churches across the nation are beginning to strategize ways to engage with Pokémon players, such as offering snacks and displaying prominent welcome signs or placing greeters near Pokéstations. This Twitter post shows how one church is enticing users into their space:

Many local museums are seeing this as an opportunity to bring in new visitors, posting on social media to “come catch ’em all” in their galleries:

Catch Pokemon at the museum! There are Poke-Stops in the Stewart Sculpture Garden and a gym in front! pic.twitter.com/n2Mx694W4R

Pokémon have invaded the Art Institute! Catch them if you can and find 14 PokéStops around the museum. #PokemonGO pic.twitter.com/MICPddACuf

Not all feedback from museum visitors regarding this new Pokémon Go craze have been positive. The Holocaust Museum and Poland’s Auschwitz Memorial are calling on Pokémon Go to remove their sites from locations where users can hunt Pokémon, since playing the game in such venues is seen as disrespectful to the Holocaust victims. Arlington National Cemetery has made a similar plea.

In Sydney, Australia, a Facebook event was organized for players to meet up and walk together through the Royal Botanic Gardens and around the exterior of the Opera House. This event attracted over one thousand people under the hashtag #PokeGoWalk. This event was not managed by the garden itself, but just imagine if institutions were to collaborate to create an event. This could bring in a mass of visitors and create new opportunities, such as offering discounted memberships to attendees or encouraging mobile users to download your organization’s app during the walk.

How far will this mobile app trend go? Will organizations begin to develop communication strategies around Pokémon Go? Although no timetable has been discussed, Niantic Labs CEO John Hanke says the company has upgrades for the app in the works that will include customizable functions for Pokéstops and PokéGyms, and they are considering including sponsored locations in the near future.—Aine Creedon