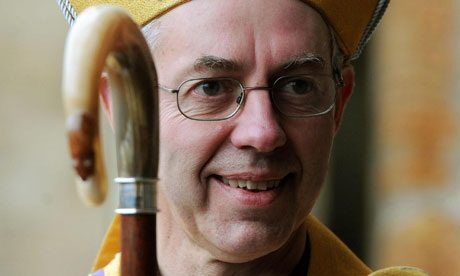 Since being elected head of the Roman Catholic Church, Pope Francis has raised the hopes of reformists within the church and without. By ditching the papal throne for a white chair and opting for humbler accommodations so he could be among priests and visitors, the Argentine has set plebeian hearts of aflutter. By declaring that “women have a primary, fundamental role” in the Catholic Church, he has given some women encouragement. Now, it’s the gays’ turn.

Last Friday, Francis met with Justin Welby, Archbishop of Canterbury and titular head of the Anglican Communion. The religious heads addressed the controversial issue of civil marriage equality, which is gaining ground not only in the United States, but globally. Both men prayed, broke bread, and discussed the urgency of protecting and strengthening families—at least those headed by one man and one woman. What set the conversation apart, however, and has faithful gays and allies excited, was the tone taken.

Nicole Winfield of the Associated Press writes, “In his remarks to Welby, Francis said he hoped they could collaborate in promoting the sacredness of life ‘and the stability of families founded on marriage’…significantly, though, Francis didn’t specify that marriage should be based on a union between a man and woman, which is how Benedict XVI and John Paul II routinely defined it in a way that made clear their opposition to same-sex marriage.”

While the Pope may not have spelled out who can be married, it’s best that bubbles be burst. Before becoming pope, Francis vehemently opposed civil marriage in his native Argentina. As Cardinal Bergoglio of Buenos Aires, he called the civil rights development an “anthropological step backward.” He also wrote, “if they’re granted marriage rights and can adopt, there could be children affected. Every person needs a masculine father and a feminine mother to help them settle their identity.” Clearly, he is not up to speed with scientific studies that have proven children raised by lesbian and gay parents are doing quite all right.

Let us be clear that Pope Francis is no ally of the lesbian, gay, bisexual, and transgender (LGBT) community, and no one should expect any changes during their lifetime. Just last week, he bemoaned the existence of a “gay lobby” in the Vatican and managed to portray gay men as responsible for the rot and corruption in Rome. Franco Gillini, president of a gay rights group, points out that just because “priests have sex with other men doesn’t authorize anyone to speak about a gay lobby, because we’re not talking about a group that represents the interests of the homosexual community but rather a group that is an integral part of a power structure—the Vatican—which is violently homophobic.”

Vatican officials did clarify that Francis was merely being diplomatic during his initial meeting with his Anglican counterpart, who is just as opposed to equal civil rights for LGBT people and their families. “We were absolutely at one on the issues,” Welby assessed after the power meeting. Without irony, he added, “and equally at one in our condemnation of homophobic behavior and our sense that the essential dignity of the human being is where you start.”

Are they so dense to realize that their official and dogmatic treatment of LGBT families as flawed and less than straight families spur and arm the very homophobia they condemn? And what about the essential dignity of human beings who happen to love someone of the same gender?—Erwin de Leon