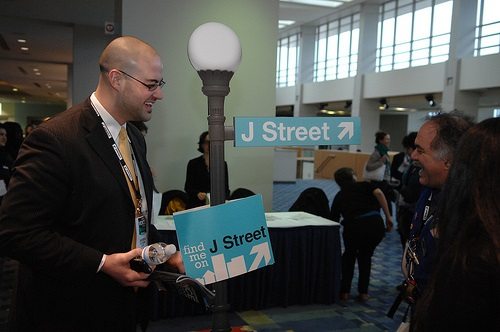 “Too Zionist for leftist purists, too leftist for right-wing ideologues”…what is J Street U to do? The student organizing arm of J Street, self-described as the “political home for pro-Israel, pro-peace Americans,” appears to have around 60 active J Street U chapters at American college campuses, but its impact in moving the opinions of the American Jewish community has been limited. This Haaretz article by Chemi Shalev suggests that J Street U is frustrated and making moves that it hopes will make it more effective.

The concern is that the American Jewish community both on campus and beyond hasn’t done much to support efforts to reach a two-state peace between Israel and Palestine or to oppose Israeli policies that liberals think might be harming prospects for peace, particularly the West Bank settlements. The intended strategy is to reach beyond college campuses and connect with the Jewish community at large.

“The Jewish community was really silent and failed to show support for John Kerry’s peace efforts,” Noa Fleischacker, a senior at Ohio’s Oberlin College and J Street U’s Midwest representative, told Haaretz. “We need to put more pressure so that a message is sent on our behalf that the status quo is not sustainable and that the Jewish community does not support occupation.”

While not endorsing the Boycott Divest Sanctions (BDS) movement, J Street U is going to “speak out strongly and clearly about the danger that settlement expansion poses to Israel’s future and its place in the international community,” as stated in an October 2014 J Street policy document, and call on Jewish groups to take steps that include “providing transparent accounting of funds that pass through their accounts to the settlements, and adopting policies that prohibit funds from flowing to projects that create obstacles to achieving a two-state solution.”

The new J Street U activism seems to be related to a delegation’s less-than-warm reception at the Jewish Federation of North America’s 2014 General Assembly meeting in Washington in November. “We tried to bring up the question of the occupation at various discussions and forums,” Fleischacker said, “but with very limited results.” Ben Poor from Occidental College in Los Angeles added, “The whole thing was completely hypocritical: first they say they want students and young people to talk, but when we come and talk to them, they don’t want to listen.”

Assembly panelists opposed to J Street apparently told the delegation and others in November that there was rampant anti-Semitism on college campuses and that J Street U’s view on the settlements and the occupation of the West Bank represent the opinions of only two percent of American Jewish students.

The hypocrisy of the American Jewish community when it comes to the Israeli peace process is sadly evident, according to J Street U president Benjy Cannon:

“[American Jews] support negotiations as long as things are going well but once the talks break down they revert to blaming the Palestinians and absolving Israel of any responsibility. They show a total lack of understanding of what it means for the moral state of our community that we choose to support the status quo.”

Another element is the hypocrisy around BDS. J Street U has generally been focused on establishing dialogue with places such as Hillel chapters on campus and organizations like the Conference of Presidents of Major Jewish Organizations off campus, the latter rejecting J Street’s application to join last April. With J Street’s opposition to the BDS movement, “the right-wingers asked us to help,” says Katherine Muller of Cornell, but dialogue with them ended at the topic of BDS, with nothing further about issues of the settlements, the rights of Palestinians, and more.

Having applauded Mahmoud Abbas’s speech in September at New York’s Cooper Union, in which the Palestinian Authority leader specifically acknowledged the contributions of J Street U toward efforts for peace, J Street doesn’t get a lot of support from those who view Palestinians as not worth the negotiating effort. J Street U, nonetheless, appears ready to press the issue of the settlements and their impact, according to Catie Stewart from Brandeis, on “the moral character of Israel as a Jewish and democratic state.”

Given the all-too-obvious political motivations of House Speaker John Boehner’s invitation to Israeli prime minister Benjamin Netanyahu to speak to a joint session of the U.S. Congress just two weeks before Israeli national elections, J Street U’s challenge to the American Jewish community is well timed. Given its criticism of the settlements and the occupation, J Street U shouldn’t expect a hasbara grant from the Netanyahu government any time soon.—Rick Cohen