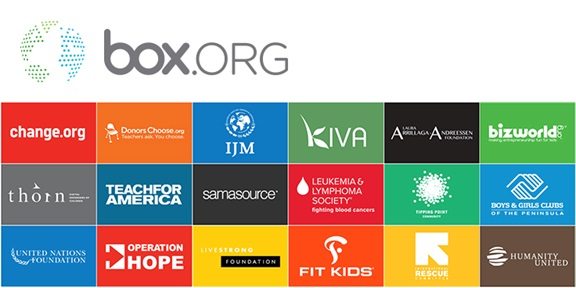 Online storage provider Box is apparently extending a hand to the nonprofit community with the creation of Box.org, a cloud networking solution that’s free forever to qualified 501(c)(3) organizations that need ten licenses or fewer. (Larger nonprofits get additional licenses at half off.)

Karen Appleton, Box’s senior vice president of global alliances, says of the new enterprise, “It’s a way for us to make a meaningful impact in the life of other people and help nonprofits achieve their mission.”

Appleton notes that nonprofits often lack the technical knowledge and resources of larger companies. “In many case, they’re just not as experienced. They have created these organizations to solve a problem and they are well versed in that problem but they aren’t well versed in how technology can aid them. We want to solve that problem of access and put these organizations on equal ground.” The San Francisco Chronicle agrees, stating, “Roughly 70 percent of nonprofit organizations have less than $1 million in revenue, and relatively few have vast Internet technology teams.”

This appears to be part of a growing nonprofit-based strategy for Box; Appleton and Box CEO Aaron Levie talked about starting a philanthropic arm shortly after she joined the company seven years ago. The company already has more than a thousand nonprofit customers, including Kiva, the World Bank, Teach for America and the Leukemia and Lymphoma Society. Box was also one of 19 Bay Area companies that gave $500,000 each to the new SFGives initiative, which will donate the money to regional antipoverty programs. In the next several months, it will increase how frequently its employees volunteer in the community. Lastly, Box has chosen Bryan Breckenridge, formerly the head of LinkedIn for Good, as Box.org’s executive director, and has backed him up with a new 10-member advisory board, whose members consist of executives of major nonprofits, including the World Bank, the Clinton Global Initiative and the International Rescue Committee.

However, tech industry cognoscenti note that this arrangement is coming at a financially precarious time for Box. PC World reports, “Box closed its fiscal year Jan. 31 with revenue of $124.2 million, up 111 percent year over year, and a net loss of $168.6 million, compared with a net loss of $112.6 million in the previous fiscal year. It has about 34,000 paying corporate customers, 40 percent of them Fortune 500 companies. However, only 7 percent of its 25 million end users pay for the service.” Box filed for an IPO earlier this year, looking to raise $250 million; that hasn’t gone forward because of declines in tech stocks. Eric Blattberg at VentureBeat describes the measure as “a promotion dressed up as a philanthropic venture.”

If you think your organization might benefit from Box.org, you can apply for the free service by clicking here.—Jason Schneiderman