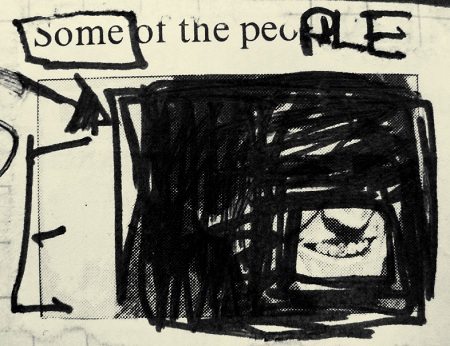 “SMILE WHEN WANTED, CRY WHEN NEEDED . . . BUT ALWAYS REMEMBER TO CURTSEY ” BY HELENA HAMILTON/WWW.HELENAHAMILTON.COM

Minnesotans will be asked on their 2012 ballot to weigh in on a proposed constitutional amendment requiring valid photo identification to vote—a strictly party-line effort approved by the state legislature in 2011. Many nonprofit groups and foundations opposed the amendment because it would discourage voting by ending Election Day registration and creating a messy system of provisional balloting. AARP was one of many organizations opposing the photo ID requirement, along with the League of Women Voters, TakeAction Minnesota, the Minnesota Council of Nonprofits, the American Civil Liberties Union, Citizens for Election Integrity, Common Cause, and several unions. Prominent Minnesota political leaders such as Democratic former vice president Walter Mondale and Republican former governor Arne Carlson agreed to serve as co-chairs of the opposition campaign, which was named “Our Vote Our Future.”

Backing the amendment was the organization Minnesota Majority, styling itself as a conservative voice supporting “traditional values”1 and holding a press conference to criticize AARP’s opposition, alleging that a majority of AARP members would not be in agreement—at which point several people identifying themselves as AARP members cut up their membership cards and chided AARP for opposing the proposed measure. Notwithstanding that bit of political theater, Minnesota Majority had no real basis for its claim. A few days later, news reports noted that the ballot fund supporting the amendment, Protect My Vote, was itself started by Minnesota Majority, and that its largest contributor was Joan Cummins, wife of Bob Cummins—who, according to Minnesota Public Radio, is “one of Minnesota’s most generous Republican donors” as well as founder of the Freedom Club, an organization that was instrumental in the GOP’s having won control of an historic number of state legislatures in 2010.2 However, the creative visuals and attacks in the Protect My Vote press conference got more attention than the questionable practices and affiliations of the attackers of AARP. Accustomed to operating in a nonpartisan space where it could advocate for positions without regard to political party affiliations, AARP nonetheless felt moved to argue that its position on the proposal was a long-standing formal and fully vetted part of its government accountability agenda.

While Minnesota has endured increasing polarization in political dialogue for a decade now, the political environment for nonprofits underwent a major shift with the Citizens United decision in 2010 blocking government regulation of political spending. The decision affected twenty-four states and led to a slew of vehicles for moving money through nonprofits to support partisan agendas. This shift raises some critical challenges to protecting the nonprofit sector’s nonpartisan role. When an increasing number of issues are defined as partisan, nonprofits that work on those issues to advance their missions are tossed into the hyperpartisan arena—as are their members, donors, recipients of services, party activists, and the media. What should nonprofits do to avoid or manage risk in this politicized partisan environment? What strategic responses work for nonprofits accused of partisanship? And, is it possible for nonprofits to use their nonpartisan status to mitigate the detrimental effects of political polarization?

The vast majority of nonprofits are nonpartisan—most U.S. nonprofits have IRS 501(c)(3) status, prohibiting them from partisan political activity. However, being “nonpartisan” does not mean the same thing as being neutral, or having no positions on public policy issues. Nonprofits are called on not just to effectively deliver their services but also to endeavor to influence the systems, structures, and policies that affect the causes of problems—for good or for bad—or that create opportunities. Having a voice in policy debates is essential to the work done by many organizations. Nonprofits feed and house people, prepare kids for kindergarten, protect the environment, promote an engaged and informed citizenship, and deliver any number of services to the more vulnerable segments of the population—from the elderly to people living with disabilities to victims of natural disaster—but progress toward their goals is often dependent on decisions about systems and resources made by the legislative bodies around the country; nonprofits’ on-the-ground experience and expertise provide both practical information and community perspective that help inform these decisions.

Participating in legislative conversations does not come without risk. When nonprofits move beyond the world of service delivery and enter the policy arena, many of their leaders find that the outside perceptions of their organizations change. Any number of nonprofit advocates have delivered powerful testimony to legislative committees—backed by sound data about their programs and powerful personal stories about the impact of a debated policy—only to be caught in the cross fire of political fights, with their mere presence in the debate used as a weapon to challenge their nonpartisanship, tax-exempt status, and the good work they are doing in the community. Increasingly, nonprofit positions are being cast as “conservative” or “progressive” (or often “liberal”)—and, implicitly, “Republican” or “Democratic”—as those terms are understood in our increasingly polarized political landscape.

While times have changed, with a twenty-four-hour news cycle and a seemingly permanent campaign influencing our dialogue, it is worth remembering that significant social change has frequently correlated with breakdowns in civil discourse. The abolition of slavery, the fight for suffrage, the civil rights movement, and the Vietnam War were each accompanied by politics of divisiveness. Civic organizations played a significant role in these issues, bringing the problems to public attention, advocating for fair and just solutions, and healing communities as the debates subsided. Nonprofit organizations are again at the forefront on all sides of major issues that divide communities today, such as immigration, LGBT rights, and healthcare reform, but now they face a serious challenge. The strategy of “guilt by association” promotes a belief that anyone supporting or opposing an issue position must be in cahoots with a political party and loyal to its agenda if that agenda aligns with the position. This tactic allows opponents to dismiss the value of nonprofit advocacy—no matter how compelling or well supported by evidence—as being mere politics.

Being involved in political arenas where policies are shaped is an appropriate and responsible nonprofit role, and while maintaining nonpartisan status is an ongoing challenge, nonprofits can protect their nonpartisan brand by insulating their organization from assumptions of partisanship and attacks, using the following core strategies:

Going forward there will no doubt be more attacks on nonprofits that support or oppose an issue claimed or identified as part of a partisan agenda. Don’t allow this to cause you to back away from taking a position on issues important to your mission. Instead:

Marcia Avner is a consultant to nonprofits and foundations on public policy planning, strategy, and skill building. She is a senior fellow at the Minnesota Council of Nonprofits, where she served as director of public policy for fifteen years, and teaches in the Master of Advocacy and Political Leadership program at the University of Minnesota Duluth. Marcia’s most recent publication is The Lobbying and Advocacy Handbook for Nonprofit Organizations (Amherst H. Wilder Foundation, 2002; revised 2013); Laura Wang is the executive director of the League of Women Voters (LWV) Minnesota. She previously served as the public policy coordinator for LWV Minnesota, and has worked in advocacy in the nonprofit sector for eleven years.

To comment on this article, write to us at [email protected] Order reprints from http://store.dev-npq-site.pantheonsite.io, using code 190304.

Marcia Avner is public policy director with the Minnesota Council of Nonprofits. Her work includes training, education and lobbying on issues that are important to nonprofits and the people they serve.