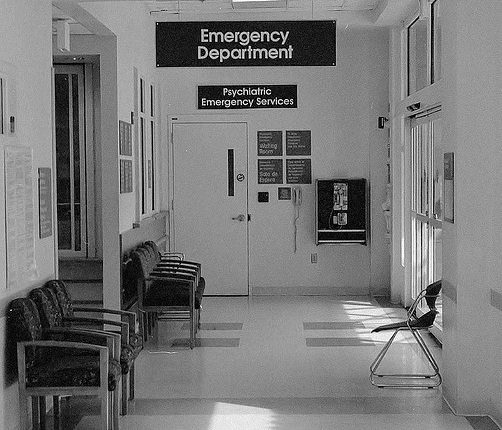 With all of the discussions in our nation’s capital regarding the need for funding mental health services, the results of budget cuts to those services are showing up there and across the rest of the country. Those cuts manifest themselves in emergency rooms where wait times have expanded significantly—to days, and sometimes even weeks. According to the Washington Post, between 2009 and 2012, resources for people with mental health needs have shrunk via $1.6 billion in budget cuts in 28 states and the District of Columbia. This has resulted in patients spending longer and longer periods in emergency rooms.

According to a report from the U.S. Centers for Disease Control and Prevention, ER wait times for all kinds of maladies have increased. A 2012 study in the journal Emergency Medicine International found that psychiatric patients make up 7 to 10 percent of those visiting ERs. The cut in resources (which includes fewer treatment spots) is resulting in patients sometimes waiting weeks before they receive treatment.

The Post cites Jeff Sternlicht, the chairman of emergency medicine at Greater Baltimore Medical Center, who commented that patients now stay in emergency rooms for an average of 15 hours before a transfer and some stay as long as three days whereas the time in the ER used to average only a few hours. “The ER department is designed for acute care,” Sternlicht said. “It’s far from the ideal place to be if you’re a psychiatric patient.”

Adding to placement problems are the physical conditions that may accompany psychiatric issues or insurance coverage restrictions. The Post reports that a 2010 Schumacher Group survey of 603 hospital emergency department administrators found that 70 percent of administrators reported waits of at least 24 hours. More stark was the fact that 10 percent of those surveyed responded that their emergency rooms had boarded patients for a week or more.

A 2012 article in Emergency Research International found that psychiatric patients remain in the emergency department 3.2 times longer than other patients. All appear to agree that this trend is one with negative consequences both for those seeking psychiatric help and for emergency rooms. –Ruth McCambridge