Public Universities are Failing the Public

The act of successfully finishing high school is no longer a sufficient foundation upon which to build a stable financial future. Jobs that lead upward on the economic ladder require greater educational credentials. To enable the greater part of all students to have a chance to fulfill this requirement, we have in place a large network of public-funded colleges and universities. However, Dimitrios Halikias and Richard V. Reeves, writing for the Brookings Institution, have found that a number, particularly among the most selective, are not fulfilling this responsibility and making good on the public’s investment. And, in too many cases, their failure to help those who need their aid the most has not come because they have focused their energies on research and innovation.

Earlier this year, NPQ reported on work published by Georgetown’s McCourt School of Public Policy showing that many qualified low-income students were not being admitted to the best public and private universities. Because of this, we see an education gap that mirrors the growing income and wealth gap: “Although college enrollment rates generally have been rising for all population groups, enrollments have risen the least for low-income students. The disparity in graduation rates by economic class is stunning: more than half of students from the top quartile of family income finish college, but fewer than one in ten from the bottom quartile do.” 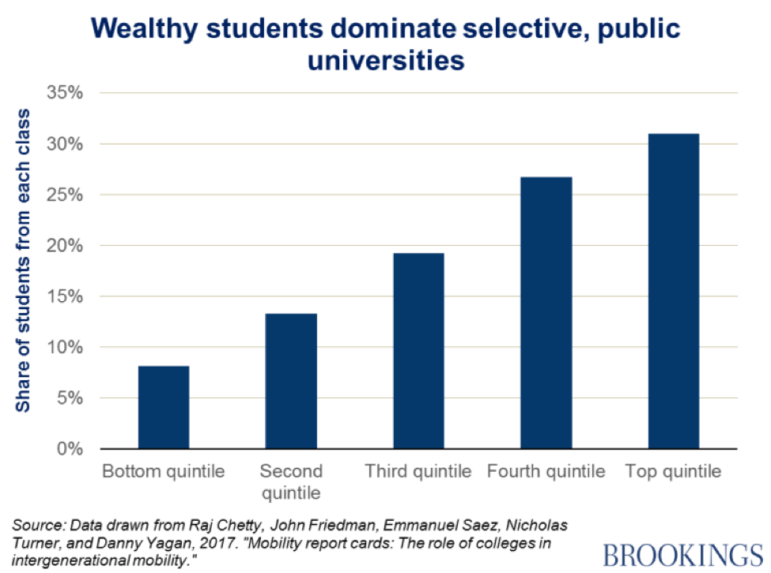 When public colleges and universities do not benefit all students equally, there’s a significant societal cost because it shifts scarce resources in a counterintuitive manner. “Public subsidies for the relatively affluent directly reify existing inequalities by reinforcing the opportunity ‘choke-point’ of higher education, driving up demand (and costs), while crowding out other institutional opportunities for social mobility.”

An estimated 43,000 highly qualified, low-income students are not being admitted to the public universities that would benefit them the most. This failure cannot be laid at the feet, as some have charged, of failing public schools. “Low-income students whose scores are equal or better than the average score of all current selective school students graduate at the same rate as well.” Nor is it the result, as some might think, of a greater focus on the part of some universities on graduate education and research: “One might hope that schools with little success in promoting opportunity make up for it with their research output. Unfortunately, there seems to be little negative correlation between research output and success in generating mobility. Most of low-mobility universities also produce little to no research.”

If we believe that post–high school education is critical to success in life and crossing the wealth divide, public colleges and universities must be able to work for all students. If not, they become just another part of a system that strengthens societal inequality. As Halikias and Reeves concluded, “Public investment in higher education too often fails to produce either social mobility or socially beneficial research…the significant public subsidies spent on the education of the relatively affluent could be better spent elsewhere.”

Our growing awareness of the failure of many colleges and universities to be effective economic ladders requires us to look at what policy changes would give us the results we want and need. One school of thought is to minimize the importance of elite institutions, public and private, by growing more effective pathways in community colleges and, as President Trump has recently recommended, boosting apprenticeship as “a valuable way to give disadvantaged students much-needed job skills.” Funds for expanding in these directions would come from reallocating funding from public colleges and universities that currently serve to subsidize tuition.

The danger in this strategy is that colleges and universities provide a social network that remains in place over a lifetime, providing entry points for future jobs that can be quite valuable. Making it harder for low- and middle-income students to enter the classrooms of every university further enshrines the divides we are seeking to overcome.

The investments we make in colleges, through direct allocations or through the benefits of tax deductibility, need to be maximized for all students. Stronger efforts need to be made to ensure that all student bodies mirror the population. The cost of those public supports needs to be commitment to affirmative action to reach that balanced enrollment level.—Martin Levine