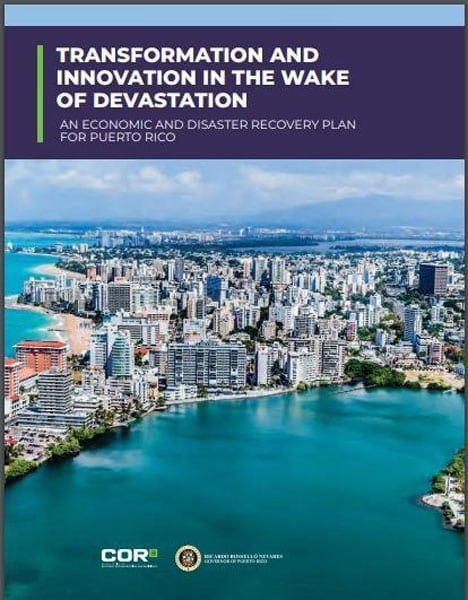 In a “discovery” that should surprise no one, Frances Robles in the New York Times reports that, “The government of Puerto Rico quietly acknowledged in a report posted online that in all likelihood more than 1,400 people died in the aftermath of Hurricane Maria—a figure that is more than 20 times the official death toll.” As NPQ reported in June, the government’s health department had already upped its estimate by 1,200 people. For his part, Governor Ricardo Rosselló said at the time, “We’ve been saying that the numbers were going to be much higher.”

An official government estimate is expected after a report is released from a team based out of George Washington University in Washington, DC in the next few weeks.

In the meantime, the Times pays relatively little attention to the report itself. Titled Transformation and Innovation in the Wake of Devastation: An Economic and Disaster Recovery Plan for Puerto Rico, the report is still in “draft” form but outlines the Puerto Rican government’s vision for recovery, which includes a $125-billion, 10-year plan.

“The recovery,” the draft report notes, “will need to be supported by multiple federal agencies and nonfederal programs, including the Disaster Relief Fund; Congressional Supplemental Appropriations; steady-state federal programs; and nongovernment sources such as private insurance claims, philanthropic private and corporate foundations, and venture capital.”

In the draft report, the Puerto Rico government commits to employing “a dashboard of recovery indicators—organized around key themes such as economic growth and quality of life—for tracking progress, identifying areas of strength and weakness, supporting economic growth, and building community resilience to future shocks.”

One key point from the draft report is that the government estimates that recovery is at least a ten-year process. Judging from the experience of New Orleans after Hurricane Katrina, that would seem to be a reasonable estimate. The government’s plan, correspondingly, divides its proposed recovery response into two periods: a preliminary two-year period to meet immediate priorities, and a longer, eight-year period (years 3 through 10) focused on more structural changes.

As for the top short-term (years 1 and 2) needs, the government identifies these three:

In terms of longer-term goals, by September 2027, the government of Puerto Rico aims to:

The report itself observes that in the decade after the island’s fiscal crisis began in 2006 and before Hurricane Maria hit the island, Puerto Rico had already suffered a negative net migration of 525,769 people, equivalent to 14 percent of its population.

“It is estimated,” the report continues, “that destruction from Hurricanes Irma and Maria will lead to as much outmigration from the Island in two years as seen in the previous decade under a notable fiscal crisis.”

The report also offers a breakdown of the impact of Maria, including the 1,427-deaths figure cited by the Times; detailed chapters on how to rebuild energy, water, communications, and transportation systems; and a list of 270 capital projects to undertake over the coming decade.

As far as how to rebuild for the long haul, however, the government’s vision is largely uninspired. On page 40 of the report, the government outlines its approach as follows:

In short, the Puerto Rican government’s approach centers on continued austerity, a vision that reflects what Naomi Klein calls the Shock Doctrine, which makes a just recovery highly unlikely. Writing in NPQ last March, Cyndi Suarez laid out an alternative vision by which Puerto Rico might achieve a just and equitable recovery. To do this, Suarez wrote, requires “tapping into the capacities and political power of local communities in Puerto Rico.”

“This is not only necessary to counter the US government’s strangling efforts,” Suarez adds, “but to build a regime at home that can truly be an effective representative of the Puerto Rican people.”—Steve Dubb