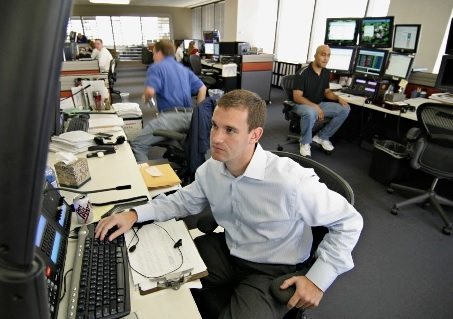 John Arnold got his start making huge money for the Enron corporation in the 1990s through natural gas trading, went on to create his own hedge fund after Enron’s collapse, and retired at the age of 38, launching his new career as a philanthropist with his wife, Laura. The newest grant of the Laura and John Arnold Foundation gives $2.8 million to the Center for Public Integrity, the well-respected, Pulitzer Prize–winning investigative journalism organization headed by Bill Buzenberg, the former vice president for news at National Public Radio. The grant is meant to help CPI launch a new project on state campaign finance.

In the International Business Times, David Sirota writes that the grant “presents CPI with an awkward situation—can it impartially probe his role among the campaign donors who wield outsize influence in state elections?”

Buzenberg responded with a predictable answer. “There really is an editorial firewall,” Buzenberg told the IBTimes. “Our editorial team is very independent, and the development team has the relationship with the Arnold Foundation. We publicly disclose all of our funders, and our reporters will not kowtow to a funder. They guard their independence pretty strongly.”

To be fair to Arnold, he is hardly the first corporate mogul to make grants and investments in nonprofit news media, and this one isn’t even his first: Along with personal philanthropic arms connected to Jeff Skoll, Shelly and Donald Rubin, Peter Buck, and of course its founders, Herb and Marion Sandler, Arnold is a major funder of ProPublica.

Without doubting the sincerity of Buzenberg’s statement, the news media in the U.S. has often been reluctant to explore or willing to soft-pedal issues connected to their advertisers and supporters. But the acquisition of news outlets by individual entrepreneurs, typically from Silicon Valley tech firms (like Pierre Omidyar’s capitalization of Glenn Greenwald’s new venture and Jeff Bezos’s purchase of the Washington Post) and from hedge funds like Arnold, may pose new challenges for the likes of CPI.

Arnold, for example, has been actively trying to shape the national debate over public sector pensions, working with the Pew Center on the States (to which he has committed $4.8 million) on a joint project promoting pension reform through cutting back on workers benefits or shifting them into 401(k)s. Sirota reports that the Arnold/Pew campaign has “downplayed other proposals to preserve traditional pension benefits and replenish pension funds depleted by the financial crisis and the chronic refusal of politicians to make actuarially required contributions.” He has also used his wealth to support political candidates (such as Rhode Island Democratic State Treasurer Gina Raimondo) and ballot initiatives in favor of reducing public workers’ benefits. WNET returned a $3.5 million grant from the Arnold Foundation that would have paid for pension-related programming on public television. PBS stations complained that WNET’s acceptance of the Arnold Foundation grant would have violated PBS conflict of interest standards.

It’s a tough call for news outlets that are increasingly dependent on philanthropic support, which of course frequently comes from corporate moguls like Arnold. For example, various National Public Radio hosts such as Audie Cornish and Adam Davidson have been challenged for allegedly violating NPR’s conflict of interest standards. These standards, contends NPR ombudsman Edward Schumacher-Matos, are simply impossible to implement across the board, given that NPR and its member stations receive substantial support from corporate sponsors that may become subjects of NPR stories at some point in time.

“There is no way to totally eliminate the appearance of all conflicts of interest, and sometimes the conflict itself,” Schumacher-Matos wrote in 2012. “Any system comes down at some point to trust. You either trust NPR’s reporters and editors to be impartial, or you don’t.”

Trust is the fundamental position of Buzenberg and CPI as well. According to Sirota, CPI did not allow IBTimes to examine the grant agreement with the Arnold Foundation, but Buzenberg said that there were no foundation-mandated strings with the money. While that might be the case, and while CPI has reported on the Arnolds’ campaign finance involvement in the past (dealing with their support of campaigns against political candidates who, unlike the Arnolds, do not favor privatizing public education—the Arnolds are major supporters of charter schools and other alternatives to traditional public schools), Sirota writes that a recent CPI story on pension politics, documenting “how wealthy political activists financed a seminar aimed at convincing state and federal judges to invalidate constitutional protections for public workers’ pensions” (a seminar that was partly sponsored by the Arnold Foundation), failed to mention Arnold at all. That CPI story appeared at the time CPI was negotiating for the Arnold grant for its campaign finance project. Although Buzenberg said that Arnold’s name was dropped from the story because of space limitations, it isn’t a good signal.

Much of the concern around the Arnold Foundation grants to CPI (and presumably ProPublica) is connected to Arnold’s vigorous and persistent attacks on public pensions, but Nonprofit Quarterly has paid much attention to the Arnolds’ equally energetic and financially generous support of charter schools and school privatization efforts, such as their sponsorship of National School Choice Week and their use of campaign donations to turn reluctant Democratic candidates into charter school allies. Arnold has also ventured into the latest privatizing social enterprise fad, Social Impact Bonds. Will Arnold use his campaign finance largesse to promote SIBs in addition to school privatization wedges like charter schools?

The ultimate challenge for Buzenberg and CPI will be whether Arnold can keep his hands out of the organization’s campaign finance coverage. Presumably, the ethical standards at CPI require the fundraisers and advertisers to steer clear of any interaction meant to affect CPI coverage and content, but as we have written before, nonprofits have been known to “self-censor” because of the sensitivities, real or imagined, of funders and investors. As someone who honed his skills in the ethical cesspool that was Enron, can Arnold be restrained? Remember, Arnold is the man who described criticisms of his agenda on pension fund reform as an “organized smear campaign” directed at him personally and at his foundation, hardly a temperate reaction to the give-and-take in public policy when someone like him distributes multiple millions to convince the public to follow his line. Buzenberg will have to be on his ethical toes on this one, because much of the media will be watching.—Rick Cohen