Race and Health, and Doulas for Social Justice 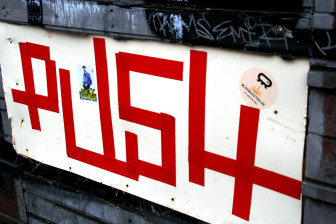 This piece is part of our ongoing Equity, Diversity, and Inclusion (EDI) Project, created to spotlight millennials’ voices and thoughts on diversity and justice. We urge you to read how this project came together in collaboration between NPQ and the Young Nonprofit Professionals Network and about the ideology behind this series. We intend to publish another 19 pieces in the upcoming months. Readers will be able to subscribe to an RSS feed to follow articles as they are published, approximately every two weeks. NPQ and YNPN will be using the hashtag #EDISeries, so post about the series along with us.

Being pregnant in this country can be downright scary. We live with a healthcare system that often disempowers people seeking perinatal care, and this is never more evident than during childbirth or abortion. As a doula, I have watched women repeatedly refuse an epidural from multiple care providers after having made it explicitly clear from the start that they are not interested in that type of intervention. I have seen doctors tell a woman to stop pushing because they were not ready yet. I have heard nurses fight with doctors on behalf of a laboring woman when she is unable to continue arguing with a physician who fails to listen to her needs. Don’t even get me started on the battle that women have to go through to get an abortion in this country.

If you are a minority in the United States, being pregnant can also be deadly. Compounding the disempowering nature of our healthcare system are significant disparities in maternal and infant outcomes based on race. Nationwide, African-American women are nearly four times more likely to die than white women from pregnancy-related causes.1 In New York City, the rate of disparity between white, non-Hispanic white, and African-American women who die from pregnancy related causes rises to an appalling twelve times the likelihood.2 The unequal birth outcomes extend beyond maternal mortality—babies born to women of color face higher rates of low birth weight, preterm birth, and cesarean birth.3 They also face lower rates of breastfeeding initiation and duration.4 Preterm birth disparities exist between black and white infants even after accounting for risk factors such as obesity, hypertension, and smoking.5 Research has demonstrated that such disparities—like the egregious race-based difference in maternal mortality and increased rates of preterm birth—reflect differences in quality of care, decreased access to care, discriminatory treatment, and other social determinants of health. In other words, if you are an African-American person in this country and you are pregnant, you face a much higher chance of dying because of systemic failures in the healthcare system. This isn’t simply a healthcare quality issue; it is a social justice issue. For decades, the public health and nonprofit communities have acknowledged disproportionately high rates of adverse perinatal health outcomes experienced by people of color, but we have failed at implementing programs that address these differences.6 While no singular fix or programmatic adjustment exists that could come close to evening out the existing disparities, it is clear that something needs to be done.

Doulas are one way to help solve this social justice issue. Data show that doula support can potentially impact the extreme and persistent race-based disparities in maternal health outcomes, empower women to take charge of their own healthcare needs in general, and reduce healthcare costs even beyond those strictly connected to the perinatal period. A full-spectrum doula is a trained attendant who provides individualized physical and emotional support throughout pregnancy, whether the pregnant person faces birth, miscarriage, stillbirth, fetal anomaly, or abortion. A doula does not provide medical care; rather, she focuses on providing practical assistance—for example, developing a birth plan, thinking through logistics (including how to get to the hospital, what to bring to the hospital, back-up plans, after-care plans), empowering a family to communicate its needs, providing constant support during labor, and helping to initiate successful breastfeeding after birth.

The support that doulas provide during labor reduces cesarean section rates, decreases the need for augmentation (stimulating contractions in order to speed up labor), and decreases the length of labor.7 Beyond the informational and healthcare support, doulas also provide emotional support. At The Doula Project, a New York City organization made up of fifty full-spectrum volunteer doulas who provide both birth and abortion support, volunteers hold space, as we describe it, for women to experience whatever process they are going through in a safe and respectful environment. Holding space may simply mean closing a door and dimming the lights to create a quiet birthing space. It may mean holding a woman while she sobs after learning that she is experiencing a miscarriage. It may mean singing with her through an abortion. A doula can spend afternoons watching over new mothers napping in recovery rooms—keeping an eye on the baby and intercepting the well-meaning people who might interrupt the mother’s much-needed sleep.

Doulas also encourage women to be their own best health advocate. In fact, doula-supported births are linked to an increased sense of self-determination among women—aiding in a future reduction in health disparities by empowering women to be active participants in their healthcare.8 For instance, a doula can help parents develop questions to ask their providers about perinatal health and baby healthcare. When I talk a family through their thought process on a non-emergent healthcare decision, I teach them the B.R.A.I.N. acronym:

It is a method that helps those experiencing birth make informed decisions while allowing them to feel confident about their choices. Childbirth is a major life event, so ensuring that people feel confident about their decision-making and self-advocacy skills during the entire birthing process is foundational to a healthier life course for the entire family. When a doula helps to increase a woman’s autonomy around healthcare decision making, the whole course of her life may shift.

Widespread adoption of doula support would be sure to provide another important benefit: reduction in healthcare costs, as demonstrated by the documented reduction of unnecessary medical interventions and avoidable complications in the case of doula-assisted perinatal care. In 2012, New York State Medicaid paid for 72,883 births in New York City, nearly 60 percent of total city births that year. If a doula had attended all of those births, there could have been a reduction in total spending by approximately $43 million, for an estimated savings of $590 per birth.9 Doula-supported births are also known for increasing the initiation and duration of breastfeeding, which improves long-term maternal and infant health outcomes—another reduction in healthcare costs: According to a recent cost–benefits analysis completed by Choices in Childbirth (a nonprofit dedicated to providing families with evidence-based options), an estimated $31 billion could be saved nationwide every year if ideal breastfeeding rates were reached.10

Unfortunately, for many women, doula-supported birth is impossible to afford. Although some doulas in the United States work on a volunteer basis, most are fee-for-service, which means that they set a rate that is paid out of pocket by clients. In a 2013 survey, only six percent of births were reported by mothers as doula-supported.11 Research shows that maternal health benefits stemming from doula support are greatest among people living in low-income, less advantaged communities. This is because of the individualized care and decreased interventions associated with a doula-supported birth. Yet, Medicaid clients are only half as likely as privately insured people to know what a doula does. When presented with the option, however, Medicaid clients are more likely to be interested in doula care than are privately insured clients.12 While the reasons behind these facts are not well documented, they do demonstrate a gap in the knowledge of, use of, and access to services that could help decrease the disparities described above.

Volunteers are the heart of many nonprofit organizations—I know this firsthand, being a nonprofit employee, as well as a volunteer at The Doula Project. Volunteer doula programs are valuable, but they are not sustainable in the long run as there aren’t enough of them to cover the needs of clients. Volunteers burn out. They relocate. They struggle to commit to the hours of support a birth requires. When I take on a birth client, I meet with her a minimum of two times before the birth and once after the birth, usually in her home. I provide a constant flow of informational and emotional support upon being matched with the expectant mother, and am on call twenty-four hours a day for a three-week period around the due date. I spend anywhere from twelve to thirty-six hours with families during a birth, and make sure that successful breastfeeding happens within the baby’s first hour. And that’s on top of my full-time paying job.

Clearly, a volunteer-based system of doula-supported care is unsustainable, and a fee-for-service model is inequitable given that many people cannot afford to pay for doula support out of pocket. I would like to see health insurance cover doula-supported births, so that women of all races and economic backgrounds have access to patient-centered perinatal care. I would also like to see more community-based doula programs that build networks for mothers, connecting them to the kind of support that leads to the profound life changes that doula-supported care effects.  We need to invest in empowering communities, if we want to create substantial social justice–minded change in birth disparities—and doulas should play a major role in that transformation.

Megan Aebi is a full-spectrum doula committed to supporting communities of color, and is a proud member of The Doula Project. She also runs a global collaborative for a local nonprofit. Megan believes in the ability of communities to create sustainable change through activism. She holds an MA in public health from Boston University.