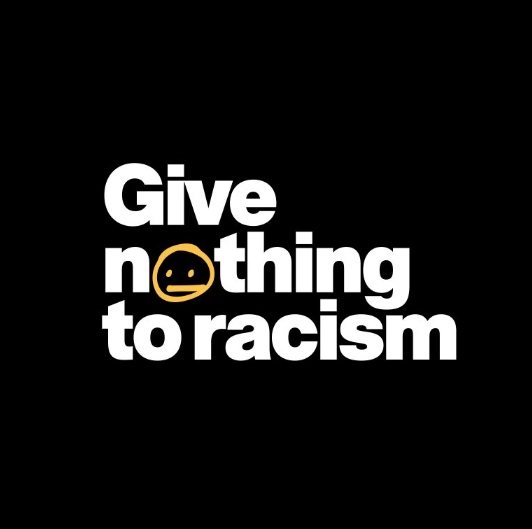 “Racism needs your help to survive. You may not be in a position to give much to racism, but whatever you feel comfortable giving will make a huge difference.”

These are the words of Taika Waititi, Hollywood director and New Zealander of the year, in New Zealand’s public campaign, “Give nothing to racism.”

The campaign has a website which hosts videos where New Zealand celebrities laugh at a presumably racist joke and then break into an “I don’t think so” glare. Website visitors can make their own video and upload it to the site.

The website also has a toolkit that includes partnership guidelines for the “Give nothing to racism” brand. The “Getting on board” section thanks you for joining the campaign in taking a stand against “every little bit of racism.” It goes on,

Most New Zealanders and New Zealand organizations don’t tolerate overt racism. But small, seemingly harmless acts slip by. They’re easier to ignore or passively agree with. But every little bit feeds racism, and we’re taking a stand against it.

The Give Nothing to Racism campaign calls out these little acts of racism. It tackles casual racism directly.

The purpose of this document is to enable supporters to Give Nothing to Racism in a way that suits them best.

These guidelines include assets you can use, key messages that enable you to foster productive conversation around the issue, and some advice on how to respond to racism when you, or those around you, encounter it.

The intent of these guidelines is to ensure the Give Nothing to Racism campaign is applied consistently and with integrity across all touchpoints.

It then goes on to describe the issue: “Racism is a problem in New Zealand. The first step is admitting it.” It then gives statistics: One in three Human Rights Commission complaints are about racial discrimination, even though “most people who experience racism don’t complain.”

New Zealanders have seen an increase in racial attacks and racial minorities report feeling scared. Yet many New Zealanders don’t think racism is a problem in their country. Race Relations Commissioner (yes, their Human Rights Commission has this role) Dame Susan Devoy said New Zealanders are “being influenced by increasing levels of xenophobia and racism overseas, and she personally wrote to New Zealand’s most recognizable faces asking them to help put a stop to it.”

“Racial prejudice and intolerance starts small, in quiet places, in our everyday lives. When it becomes normalized, it turns into overt racism and extremism,” she said.

The campaign comes ahead of a national election where the major issue is tightening the borders to control migration. More than 70,000 people migrated to New Zealand last year, most of them settling in Auckland, leading to housing shortages and road congestion.

New Zealand is known for its peacefulness, and Devoy said, “Whether it stays that way will depend on us.” (And perhaps, not politicians.) The campaign reminds us, “You don’t have to be a full-on racist; just being a tiny racist is enough. A smile, a cheeky giggle, even a simple nod and agreement, it all adds up, and it gives others the message it’s OK.” The toolkit includes logo options and instructions on how to use them. It invites us all to expose racism and let it “carry the tension the awkwardness, the consequences it deserves.”

What a brilliant idea, designed to address the cultural conditions that support racism and to spread virally. As we in the U.S. explore ways to respond to the reemergence of explicit racism and xenophobia, we may want to consider cultural strategies.—Cyndi Suarez