Rappelling for Charity: Not for the Weak of Heart 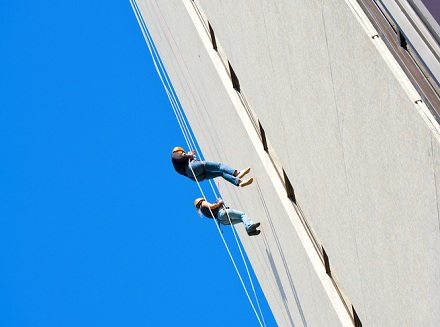 Last Friday and Saturday, more than 150 people rappelled down the side of a 32-story building to raise $230,000 for a Denver cancer charity. Here’s what gets us: according to the article, “many participants were first-time ‘rappellers’ and described an adrenalin-pumping feeling of vertigo.” Stephen Mideks participated to honor a friend who died of cancer. “The most challenging part of the process is that initial lean back over the edge of the building,” he said.

One of the technicians with Over the Edge, the group that collaborated with the Cancer League of Colorado on the event, said, “Just standing on the edge of a building this tall can be gut-wrenching, but once rappellers get themselves to trust the ropes and fall back, it’s smooth sailing from there and a great ride down enjoying the views!”

According to its website, Cancer League of Colorado is an all-volunteer run nonprofit that has raised more than $10 million for cancer research and care for cancer patients over the past 43 years. The sports event as charity is now an unsurprising staple of American life. We have races, walks, triathlons and “polar bear” plunges. NPQ covers them all but this one makes us feel queasy just looking at it. –Ruth McCambridge