Record Number of Journalists Imprisoned in 2012 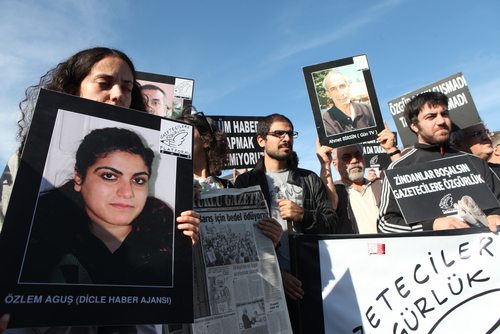 The Committee to Protect Journalists has released its annual tally of the numbers of journalists imprisoned worldwide and reports that it is at its highest point since it began tracking the issue in 1990. The high is partially due to what CPJ says is “the widespread use of charges of terrorism and other anti-state offenses against critical reporters and editors.” According to CPJ ,there were 232 individuals behind bars on December 1 of this year, an increase of 53 over the same day last year and a 29.6 percentage jump. The previous record was 185 in 1996. The stories the imprisoned journalists that CPJ counted are available here.

The 10 worst offenders were Turkey, Iran, China, Eritrea, Syria, Vietnam, Azerbaijan, Ethiopia, Uzbekistan, and Saudi Arabia. Turkey alone held 49 journalists in prison so CPJ conducted an extensive review, finding that “broadly worded anti-terror and penal code statutes have allowed Turkish authorities to conflate the coverage of banned groups and the investigation of sensitive topics with outright terrorism or other anti-state activity.” This led Mehmet Ali Birand, a top editor with the Istanbul-based station Kanal D. to call the use of anti-state laws against journalists a “national disease.”

Iran comes in second with 45 journalists in custody. CPJ attributes this to the crackdown that began after the disputed 2009 presidential election. In China, 32 journalists are in prison, with 19 of those being “Tibetans or Uighurs imprisoned for documenting ethnic tensions that escalated in 2008.” In Eritrea, which was found to be holding 28 journalists, none have ever been publicly charged with a crime or accorded a trial. The government refuses to account for the whereabouts, legal status, or health of any of the jailed journalists, though some reports suggest that up to five have died in custody.

Slightly more than half of the jailed journalists were those whose work appears primarily online, a proportion that has held relatively steady in recent years of the CPJ survey. Print journalists numbered 77 jailed worldwide. The remainder work in radio, television, and documentary filmmaking. CPJ’s list is a snapshot of journalists in custody as of 12:01 a.m. on December 1, 2012 and it does not include other journalists imprisoned and released throughout the year.

Civil society depends upon journalism and so CPJ’s work in tracking and supporting journalists in dangerous situations is critical. To understand more about their work, read this fascinating interview with Joel Simon, CPJ’s director. –Ruth McCambridge