Red Sox Clash with Charitable Foundation over “B Strong” 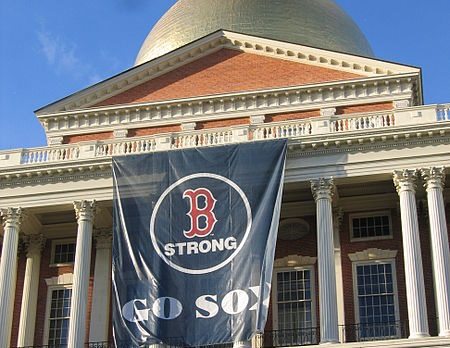 As the New England area recovered from the tragic aftermath of the bombings at the Boston Marathon, local sports teams like the Boston Bruins and the Boston Red Sox showed their solidarity with their hometown fans by taking up the slogan, “Boston Strong.” For the Sox, this meant using their signature “B” icon to make an abbreviated version—“B Strong”—that popped up on all kinds of merchandise and even cut into the grass at Fenway Park.

However, it turns out that “B Strong” is the trademarked motto of the Braden Aboud Memorial Foundation, established in 2007 to celebrate the memory of a Texan teenager. The foundation supports multiple charitable initiatives in the El Paso area, including the City of El Paso Afterschool Project, the Great Shoe Giveaway, the B Warm Blanket Drive, and The University of Texas at El Paso Braden Aboud Endowment for Area Athletes.

They’re also vigorous about defense of their trademark; in 2011, the El Paso Times reports, “the Braden Aboud Foundation had to ask the family of Belinda Hernandez, a former Chapin High School softball player who died from brain cancer, to not use ‘Bee Strong’ while gathering cancer donations because of the trademark.” So at this time, the Aboud Foundation, having sent the Red Sox a number of cease and desist letters, is considering legal action against the team and Major League Baseball.

In multiple sources, Gary Aboud, director of the foundation and Braden’s father, was quoted as saying, “We’re at an impasse and I’m afraid soon we will be going to court over it. It’s a David versus Goliath battle.” The Foundation asserts that the Red Sox have used the slogan for a number of purposes, including charitable ones, but the Braden Aboud Foundation was not approached as one of those charities.

The Red Sox, in a statement, expressed surprise about the degree of offense taken by the foundation. “Until [the] press report, the Red Sox had been unaware that the amicable discussions that were being had with the Braden Aboud Foundation were not progressing to resolve the matter. The Red Sox look forward to further such discussions and to a positive resolution—one that would, among other things, allow our distinct charitable interests mutually and successfully to co-exist.”.—Jason Schneiderman