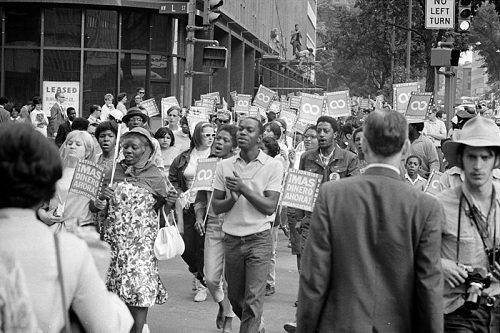 Half a century ago, the Rev. Dr. Martin Luther King, Jr. led the March on Washington for Jobs and Freedom. If they are aware of it at all, most Americans think of the march as the venue for Dr. King’s “I have a dream” speech. Some of us who remember the march recall it as a march to redress economic conditions—the disparities in income and employment that afflicted people of color, then as now…except that the economy today for people of color as a whole is much worse than 50 years ago.

Five years later, Rev. King led the Poor People’s Campaign back to Washington at a time when national unemployment was under four percent and unemployment for blacks was less than seven percent. Compare that to last month: In July, the national unemployment rate was 7.4 percent, with the white unemployment rate at 6.6 percent. For blacks, the rate was 12.5 percent—almost double that of whites. The number of people employed in the U.S. is less than it was seven years ago even though the nation’s population has increased by 18,000,000 people. A February census report put the poverty rate for African Americans at over 25 percent. In the black community, 39 percent of children lived below the federal poverty level; among Latinos, 34 percent. The most astounding (and yet relatively unknown) figure on poverty in the U.S. is that, as of 2011, there were 1.65 million households in this country in which people lived on $2.00 a day or less per person. That is the definition of “extreme poverty,” a condition people think is associated with developing countries and the world’s commitment to cut by half over the next two decades, but it exists in the affluent United States itself.

Where is the March on Washington or Poor People’s Campaign of today to protest these conditions? After an election campaign spent giving poverty a wide berth, President Obama has only just now begun to utter the “p-word” directly and raise concerns about job creation for working-class people, who have been relegated to low-wage, shorter work-week jobs, and about increasing the minimum wage. But action commensurate with those words has been limited to an array of campaign-style speeches and tours. Most Democrats in Congress generally stick to a focus on the middle class and rarely veer toward straightforward discussion of the need for explicit and robust anti-poverty programs.

One of the contributing factors is the silence of the nonprofit sector. As Pablo Eisenberg wrote this week in the Chronicle of Philanthropy, “In the last decade or so, nonprofits have stopped caring about the plight of the poor.”

“Today, matters of poverty seem to be off the radar screen of nonprofits,” Eisenberg says. “Most nonprofits…remain satisfied in pursuing their more-narrow agendas, whether related to the environment, education, or gay marriage. They show little concern about the ravages brought on the country by income inequality, homelessness, hunger, and unemployment. That couldn’t be more evident than in the failure of nonprofits to rush to oppose the massive assault on food stamps now working its way through the House of Representatives.”

Undoubtedly, many of the nation’s top nonprofits will bristle at being called out in Eisenberg’s op-ed, but there’s no doubt that the ardor of the nonprofit sector to tackle poverty based on calculations of political acceptability or access to funding has waned. It is hardly in evidence the way it was when the nation rallied around the Economic Opportunity Act in 1964, leading to the creation of a critical infrastructure of poverty-fighting institutions and programs: VISTA, Head Start, Legal Services, the Jobs Corps, Community Health Centers, and the Community Action Program.

Can the nonprofit sector rediscover the “decency,” as Eisenberg puts it, to be concerned about economic inequities and social justice? He asks whether Darren Walker, the incoming president of the Ford Foundation, and other prominent nonprofit and philanthropic leaders might “find the courage to lead a campaign to put poverty back on the agendas of nonprofits.”

While Eisenberg probably targeted Walker partly because of his roots as a leader of a nonprofit community development corporation in Harlem, Walker will be now heading a top foundation and, in theory, responding to the activism and initiatives of nonprofit leaders on the front lines. So we asked nonprofit leaders themselves what they thought might make nonprofits take up the cause of fighting poverty and make it an integral part of the identity of nonprofits of all stripes. Here is what some of them said:

All well and good from fine people truly dedicated to fighting poverty, but these statements are stronger on the analysis of nonprofits’ not taking on poverty than they are about what might turn the nonprofit sector around. We would add to their comments with these specific suggestions to reanimate the nonprofit sector to stand up against poverty:

If the problem is that foundation funders aren’t taking this issue on, it’s time for the nonprofit sector to place the issue of poverty at foundations’ doorsteps. Could it jeopardize relationships with funders to be so bold and forthright and call them out, as Jackson has done, for their pathetic support of an anti-poverty movement? We would bet the following: Those nonprofits that have the courage to speak out—loudly—to foundations and peer grantees will be the ones that establish profile and get recognition for the ability to tell the truth. Nonprofits shouldn’t argue themselves into a paralytic corner, but speak out. They might learn, in consequence, that the dangers of punitive reprisals by foundations for pushing and prodding on their grantmaking are overstated. Many foundations will welcome the candor of straight-talking nonprofits, and many foundation program officers will find nonprofit candor a useful tool for them to make their arguments with foundation execs and trustees for better anti-poverty grantmaking.

If the problem is an unwillingness of nonprofits to deviate from the political line of the Obama administration, that is even worse. President Obama needs a vocal, mobilized nonprofit to call him on his shortfalls of his actual policy agenda for nonprofits. On national nonprofit issues, the National Council on Nonprofits has been one of the rare “nonprofit infrastructure” organizations to remind the White House about nonprofit needs when it appeared that the White House showed evidence of 501(c)(3) memory lapses concerning provisions of the Affordable Care Act. As the primary deliverers of services to the poor, nonprofits should be calling on the president to restore funding that had previously cut, to fight against the continuation of the sequester, and to remember where his constituency’s policy priorities lie. The president gives a good speech about moving the economy, but it’s time for a lot more than campaign-style speeches. If nonprofits, as we have suggested and Eisenberg implies, have declined to take on the president because of some desire to support him against Republican congressional obstructionism, they will be allowing a centrist president to continue a decades-long reduction of the federal anti-poverty commitment.

Loza and Schnapp identify another problem: the imbalance in campaign finance in national elections means that the wealthy can buy lots of influence with their largesse. Poor communities will never be able to match the rich corporate donors that ply candidates with campaign contributions. With the self-protecting, self-serving attitudes of the affluent in full sway in recent decades, nonprofits have to realize that an anti-poverty agenda will be smothered in lip service and squashed somewhere between the White House and Congress. It will never succeed unless the power of the rich to purchase candidates is eliminated. Putting campaign finance reform on the nonprofit public policy advocacy agenda is a substantive step toward promoting stronger anti-poverty activism in the nonprofit sector.

Eisenberg called out a number of national organizations for their obsession with the charitable deduction—still hardly in peril—while remaining unwilling to make poverty part of their agendas. It’s time that these nonprofit associations and leadership groups recognize that they can no longer hide behind the deduction as a proxy for concern for the poor. A significant portion of tax-deductible charitable donations doesn’t get anywhere near the poor. Whatever the merits of maintaining the charitable deduction in its current form, the nonprofit sector has to blend advocacy into its anti-poverty work, and that means advocacy for government funding that’s vitally important to make nonprofits present and effective to the poverty fight. Eisenberg and Alvarado are both right that fighting poverty is a core value of the nonprofit sector, long forgotten in many parts, but legitimately an item worth raising on the agendas of nonprofits and foundations across the board.

The president may be reluctant to mention much about the poor, even though he doesn’t face a reelection battle. This is the issue where nonprofits can’t swallow their tongues because Obama is “one of us” or someone who says the right stuff. It’s time for nonprofits to call each other out regarding what they are doing to address the widening socio-economic disparities in our nation.