Reflections on Executive Leadership and Transition Data over Fifteen Years

March 27, 2017
Share
Tweet
Share
Email
Print
This article comes from the Nonprofit Quarterly‘s spring 2017 edition, which addresses ways of thinking differently about a variety of issues affecting the sector.

Over the course of fifteen years, CompassPoint Nonprofit Services conducted four national studies of nonprofit executive leadership. The first three reports were called Daring to Lead, and were produced in 2001, 2006, and 2011.1 And then in 2014–15, as part of a multifaceted project to explore our role in the executive transition management (ETM) field, we did another national gathering of data, specifically about executives and their most recent experiences of executive transition.2 Each time, we have noted how little things are changing with respect to leadership demographics and dynamics—at least in the broad swath of community-based organizations that have been our primary research audience. Over those same fifteen years, the field of nonprofit leadership development (of which we are also a part) has grown extensively as evidenced by the breadth of leadership programs nationally, the emerging prevalence of methodologies such as leadership coaching, and the growing investment by foundations. Taken together, the stagnant data and evolving leadership discourse raise concern about whether as a sector (and as the leadership practitioners serving it) we are moving quickly and intentionally enough toward alignment of our leadership aspirations for the sector with our leadership reality.

In The Evolution of Executive Transition and Allied Practices, Tom Adams lays out how the field of ETM has evolved over twenty years of practice and where he and other experts see it going next.3 Adams argues that even as ETM practitioners have strengthened and integrated their approach to organizational consulting—by adding succession and financial sustainability planning, for instance—they nevertheless encounter some seemingly intractable systemic forces: “These challenges—the elephants in the room—include the lack of diversity among nonprofit executives and boards; the bias toward unrealistic leadership expectations; underperforming or challenged boards; and the ongoing struggle to finance an overburdened sector.”4

As we improve the way we work with or within individual organizations, we also need to consider how we can confront and finally overcome these systemic “elephants in the room.” While there are many levers for change, this article looks at the disconnect between what’s happening in most organizations and what the leadership discourse has been for at least ten years now with respect to the potential for leadership itself to change—that is, for fundamentally reconsidering who leads community organizations and how they lead them. 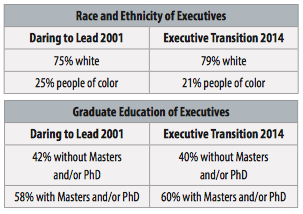 It has become exceedingly common for leaders, funders, and practitioners to posit that the people impacted directly by an issue should have leadership in defining and solving it. Given the centrality of racism and white supremacy in all social issues, how then can we be satisfied with stagnant representation of people of color in nonprofit leadership over fifteen years? Hire by hire (and board recruit by board recruit), we are keeping the sector predominantly white—demographically, politically, and culturally. If we had really done the work to understand the catastrophic consequences of this from both an equity and organizational impact perspective, we wouldn’t allow it to continue. But we haven’t. We haven’t confronted this elephant in the room: if few people of color want to lead your staff or serve on your board despite the fact that you work in and with communities of color, it is entirely likely that people of color don’t see your organization as a place through which to make social change.

Another contradiction exists in our attitude toward graduate education. Given the growing acknowledgment that professionalization of our sector has had significant negative consequences, our practice of favoring candidates with graduate degrees in our selection of executives would seem to be counterproductive. It suggests that many sector actors are simply not motivated to dismantle oppressive structures and systems (what many sum up as the “nonprofit industrial complex”). This is not to say categorically that graduate education is problematic (although some of it may very well be anathema to building equitable organizations and movements for change) but rather gives reason to ask ourselves if favoring graduate education in our selection of executives—and thus encouraging the next generation of leaders to partake in it—really is accelerating the sector’s relevance and impact. And more obviously, given its exorbitant cost and consumption of nights and weekends, we should be asking ourselves who is being screened out of the sector’s executive roles given this preference?

Where Do Executives Come From?

The leadership discourse is and has been for years overflowing with talk about preparing for baby boomer retirement, about next-generation leadership, about shared leadership, and so on. So, how can it be that only one in three organizations is capable of developing its own future executive? Or that only one in three at least recognizes the leadership already on its bench? We don’t know. We don’t know how many fully capable leaders are overlooked by outgoing executives and boards who are looking for the next “heroic leader”—in the last one’s mold, only better.

We often hear the argument that small organizations—thus, the bulk of nonprofits—can’t develop executives because there aren’t enough layers and places to move up through. This is arcane, hierarchical thinking that does a disservice to the sector in so many ways, not least of which is the problem of not retaining millennials. In reality, a small organization offers more opportunity to loosen the grip of traditional job descriptions and allow people to grow together and with equal access to the strategic and financial realities of the organization.

How we lead in too many organizations—as though we are little 1950s companies—is actually thwarting internal leadership development. Moreover, not developing our own leaders is a contradiction in that so much of our work as nonprofits is in developing leadership in external milieus, such as communities and movements. For things to change, we have to take the espoused value of internal leadership development and operationalize it, including holding current executives accountable for the bench they nurture throughout their tenure and the organizational structures and cultures they develop to engage everyone in leadership. 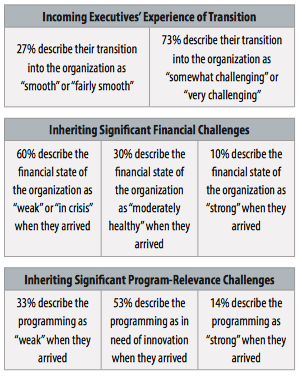 The field of executive transition management has been in the mainstream for twenty years now, with countless articles, books, and guides as well as hundreds of trained practitioners across the country. There is more than ample evidence that following its core tenets, even if outside consulting help is not available or affordable, increases the likelihood of a smooth executive transition. Retention of new executives and board and executive satisfaction are improved when these practices are followed.5

But, at a more fundamental level, these data demonstrate how far organizations get off course and how they then look to a new executive—typically from outside the organization—to try to “right the ship.” This pattern, we suspect, only serves to reinforce current leadership demographics and dynamics. If an organization actually needs a “hero” to save it, how likely is it to make major pivots in its thinking about who leads and how? And compounding this, how many potential leaders—especially first-time executives of color, for whom the stakes are extremely high—will stay clear of the opportunity to lead given the inevitably protracted challenge of a “turnaround,” if not the potential outright failure of one?

And finally, one has to wonder if so many organizations would in fact get this far off course if they were practicing and sharing leadership differently. The oft-touted “organizational agility”—the capacity to make constant sense of what’s important and adjust programming, staffing, and financing accordingly—is fostered by distributed leadership, wherein more people than just a management team are doing the sensemaking.6 This, too, has been part of the leadership discourse for many years. And yet, too few of us have actually deconstructed our top-down management to empower the diverse sensemakers across our staff, board, and constituency. As such, we are extremely vulnerable to the once-visionary executive who can’t sense the shifting sands fast enough.

These four studies were similarly conducted but independent (not longitudinal); however, the data—taken in concert with a divergent leadership discourse and the urgency of the political moment—more than gave us pause. It should be of great concern to the sector that who leads and how is not changing fast enough to catalyze the relevance of many nonprofit organizations. And further, that without sectorwide attention paid to the transition of leadership (as regards both the process of leadership and the leaders themselves), years after this current wave of executive retirements we may look up and see that nothing has really changed: that we are still a predominantly white, “charitable” sector doing the bare minimum to disrupt the social and political status quo.

The authors thank the David and Lucile Packard Foundation and the Annie E. Casey Foundation for their generous support of this project.

Jeanne Bell, MNA is the former CEO of CompassPoint, where she stewarded the evolution of the organization to focus on emerging leaders and emergent leadership practice with an explicit orientation to social change. She is the author of numerous articles on nonprofit leadership, strategy, and sustainability and co-author of several books, including most recently, The Sustainability Mindset (Jossey-Bass, 2015). Jeanne's current board service includes Borealis Philanthropy and Community Works West. She also serves on the Advisory Board for the Master of Nonprofit Administration program at the University of San Francisco's School of Management.