Reich Asks: After the Election, Are We All in This Together? 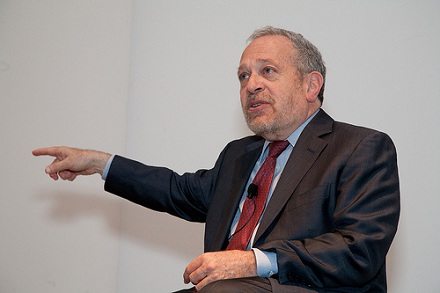 Former U.S. Secretary of Labor Robert Reich raises the pertinent post-election question of how this nation can govern itself and how we can work together to solve the huge problems this nation faces given the political vitriol of this campaign, which Reich says is the worst that he can recall. According to Reich, with a touch of hyperbole, “it’s almost a civil war.”

It may be that the divisions are worse because so little of the nation is really a jump ball. The red states are red, the blue states are blue, and only a handful are really up for grabs due to their split electorates. It may be that this year, perhaps even more so than when former Vice President Al Gore sighed audibly during his debates with George W. Bush, the two major parties’ presidential candidates appeared to clearly dislike each other. Jill Stein for the Greens and Gary Johnson for the Libertarians might have had more congenial debates.

Reich traces the venom of today’s politics to racial, gender, and economic divides:

“The nation is becoming browner and blacker. Most children born in California are now minorities. In a few years America as a whole will be a majority of minorities. Meanwhile, women have been gaining economic power. Their median wage hasn’t yet caught up with men, but it’s getting close. And with more women getting college degrees than men, their pay will surely exceed male pay in a few years. At the same time, men without college degrees continue to lose economic ground. Adjusted for inflation, their median wage is lower than it was three decades ago.”

These trends, he suggests, put “white working-class men…on the losing end of a huge demographic and economic shift.” Reich argues that past events in our history united the nation, and while we disagree with his contention that the Great Depression did so, he suggests that these events, “reminded us we were all in it together…We had to depend on each other in order to survive….[that there was a] sense of mutual dependence [that] transcended our disagreements.” Reich believes that the big issues of today—Iraq and Afghanistan compared to World War II, the Great Recession compared to the Great Recession—have “split us rather than connected us.”

Reich concludes that the post-electoral challenge is for the nation to “rediscover the public good.” Is the task of building bridges for communications, dialogue, and cooperation a deTocquevillian task that the nonprofit sector should be prepared to take on? Without masking the challenges of class and race in this nation, without falling prey to some unrealistic communitarian kumbaya ideal, we can see nonprofits—and foundations—as the venues for cooperation and dialogue. We can see nonprofits as the intermediaries for trying to construct an ethic that allows for governance despite partisan and ideological differences, an ethic built on respect and civility.

Perhaps some of the collaborative efforts of nonprofits, such as the social service agencies in Muncie, Ind. that have come together in their “Hearts and Hands United” project, offer a model. Maybe the model is found in the continuing and increasing networking of nonprofits, such as the Napa Valley Coalition of Nonprofit Agencies, which bills itself as a chamber of commerce for nonprofits dedicated to sharing ideas, resources, and strategies.

“We’re all in this together,” President Barack Obama said. “We rise or fall as one nation and as one people.” Former Massachusetts Gov. Mitt Romney wasn’t quite as sharp with a communitarian message, given his off-handed dismissal of 47 percent of the population who are “dependent on government” who don’t merit his concern. President Obama made his “together” statement in the wake of Superstorm Sandy. Like other disasters described in Rebecca Solnit’s book, A Paradise Built in Hell: The Extraordinary Communities That Arise in Disaster, Sandy could generate “a leveling moment” and a greater feeling that “we are all in it together.” Solnit writes that the “rupture” caused by disasters bring people together by geography rather than driving them apart by class or race and that such moments create, in the paraphrasing of the New York Times, “solidarity…that can forever transform individual human lives and, sometimes, entire societies.”

Do we need a disaster of Sandy’s proportions to remind Americans, exemplified by the response of nonprofits, that we are all in this together? Or in the wake of this ugly, nasty election, can nonprofits help the nation find a path to Reich’s goal of the public good?—Rick Cohen