Religious Freedom as a Legal Defense for Feeding People in Texas 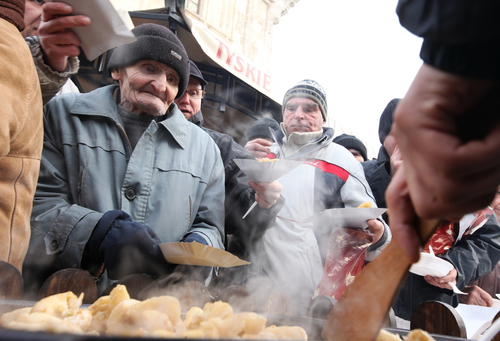 On April 7th, Joan Cheever got an unexpected visit from San Antonio police as she passed out free meals to the homeless from her personal vehicle in Maverick Park. Instead of the usual friendly conversation she had enjoyed with cops over the six years she has been feeding the homeless on Tuesday nights, Cheever was cited for a Class C misdemeanor, serving food from a personal vehicle, and a fine of $2,000. She has a mobile food truck license, but the license does not extend to her private vehicle. However, she is not going to pay the fine and she is not going to let the law stand in her way of feeding the poor. Many other indignant people might make similar threats, but Cheever is better equipped than most to follow through.

Joan Cheever founded The Chow Train in San Antonio in 2005 to serve the hungry, food insecure and homeless of San Antonio. In March 2011, The Chow Train was granted 501(c)(3) nonprofit status. In addition to serving San Antonio, Cheever and The Chow Train have traveled to Joplin, Missouri; Moore, Oklahoma; La Place, Louisiana; and Brooklyn, New York to assist those made temporarily homeless as a result of natural disasters. The Chow Train logo includes the words, “Fighting Hunger. One Plate At A Time,” though the mission of the organization is not overtly religious.

Cheever is a chef, having received training during a 16-week culinary internship at San Antonio’s Catholic Worker House. This was followed by receipt of her associate degree in Culinary Arts in 2012. As a chef, she knows well how to prepare, package, transport, and serve food that is safe to consume. Yet, it is not just her training as a chef that she is leveraging in this fight. She also has an undergraduate degree from Southern Methodist University and a graduate degree in journalism from Columbia University. Then, there is her law degree from St. Mary’s University and her membership in the bar in Texas, New York, and Connecticut.

The legal argument that Cheever is prepared to make is that police actions to prohibit her from feeding the poor are an infringement of her religious freedom, which is protected under the Texas religious freedom act. The Texas law appears to be similar to laws in Indiana and Arkansas that have sparked controversy recently because they might have allowed religious business owners to discriminate against LGBTQ persons.

Nonetheless, when confronted by police Cheever claimed her actions were protected by the free exercise of religion guaranteed by the Constitution of the United States. She told a local television station, “One of the police offers said, ‘Ma’am, if you want to pray, go to church.’ And I said, ‘This is how I pray. When I cook this food and deliver it to the people who are less fortunate.”

The National Coalition for the Homeless issued the report “Share No More: The Criminalization of Efforts to Feed People in Need,” in October 2014, outlining the rationale used to restrict the distribution of food to the homeless in several cities across the United States. One rationale, which the Coalition identified as being particularly “narrow-minded,” is that sharing food with the homeless enables them to remain homeless. The Coalition also identified three strategies cities have used to restrict food sharing. One is to restrict access to public property. A second is to require groups attempting to share food with the homeless to adhere to stringent food-safety regulations. The third is to relocate places where homeless people gather and where food sharing takes place. Despite these efforts to eradicate the homeless, they remain among us in alarming numbers in many American cities.

Last November, NPQ covered the story of Arnold Abbott, a 90-year-old Florida man arrested and charged with food sharing in Fort Lauderdale. Given the recent controversy over religious freedom laws and the recent Supreme Court rulings on religious conscience, Cheever’s will be a story, and case, worth following.—Tom Klaus