The lobby of Harvard’s Arthur M. Sackler Museum was, last week, transformed into a memorial for people who have died from opioid overdoses in Massachusetts.

The installation, Remember Their Names, had the names of 250 victims of overdose ascending a long museum stairway alongside a DIY plaque that read, “IN SOLEMNITY WE RECORD THE COMPLEXITY OF THE SACKLER LEGACY…WE MOURN AND HONOR THE VOICES SILENCED BY THE OPIOID EPIDEMIC.” The plaque looks strikingly similar to the original one, which recognizes the donation of Arthur M. Sackler.

The installation is the work of three students in the History of Art and Architecture department‚ Kaitlin Hao, Wendy Yu, and Samantha J. Meade—who joined the project with a planned protest at the museum.

The museum agreed to house the exhibit but forbid it from being installed in the lobby. The lobby is indeed where it the artists placed it.

“We went in on Friday fully expecting to get arrested,” Hao, who conceived the idea for the project before collaborating with Yu and Meade, told Hyperallergic in a phone conversation. “I contacted my family beforehand and told them that I might be arrested.”

In an email, art history major Gavin Moulton told Hyperallergic, “Some (eventually empty) threats were made against us concerning the police, grades, and paying for damages.” Moulton added that the group was careful to use materials, such as painter’s cloth and painters’ tape, that would not damage the building.

David Roxburgh, chair of the Harvard History of Art and Architecture department, told Hyperallergic in an email:

The Department of History of Art and Architecture is under the purview of the University at large and does not control the public areas of the multi-tenant building (including the stairwell and lobby) in which we are housed. We were able to reserve the large lower-level lecture hall beneath the lobby for the memorial and related activities stemming from the students’ work for Professor Blier’s course on the museum. The installation and memorial were thoughtful and beautifully mounted. It was a moving event. The student organizers had proposed its deinstallation on Friday, December 6th. We were happy to see the installation remain on the stairway through this Monday.

This is not the first protest at the museum, but University President Lawrence S. Bacow has so far refused to remove Arthur Sackler’s name.

“Arthur had nothing to do with OxyContin,” said his widow, Jillian Sackler, in a statement provided to Hyperallergic following Tufts’ decision to remove his name from its school of medicine. “The man has been dead for 32 years. He did not profit from OxyContin, and none of his philanthropic gifts were in any way connected to opioids or to deceptive medical marketing—which he likewise had nothing to do with. It deeply saddens me to witness Arthur being blamed for actions taken by his brothers and other OxySacklers.”

Hao disagrees, believing that the name Sackler is now synonymous with the irresponsible marketing of a deadly drug that has killed many thousands across the country in the name of greed. “After seeing how well this event went, it has encouraged us to go after these issues that we were told they were impossible to go after,” said Hao. “This is just the first event of many to come.”—Ruth McCambridge 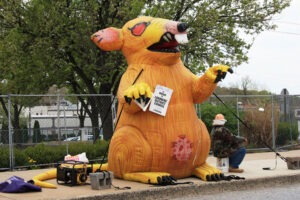