Rich and Poor in the US: New Study Reveals Geographically-Based Dynamics 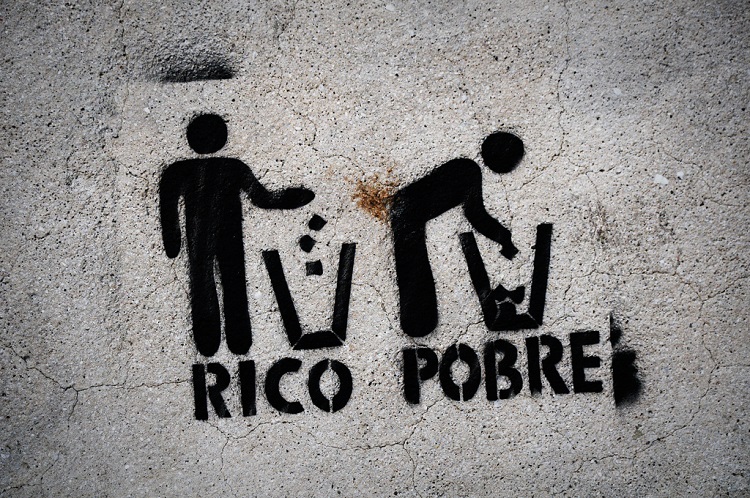 There is a serious and growing geographic divide between the rich and the poor that requires attention. That’s the conclusion reached by researchers at the Economic Innovation Group.

Using U.S. Census Department data, the study’s authors developed the Distressed Communities Index (DCI) to study the economic health of America down to the zip code level. They found “a growing body of evidence that the more time an individual spends living in a distressed community—especially at childhood—the worse that individual’s lifetime chances of achieving economic stability or success. And not all poor neighborhoods are alike; some offer vastly better chances of economic mobility than others.”

In its analysis, EIG researchers integrated seven components that included both individual and collective perspectives to develop the DCI.

A low-wage but high-employment community may have the same official poverty rate as one suffering from pervasive joblessness and low levels of investment. State and federal safety net programs may further equalize individual living standards between the two communities. But the latter neighborhood is distressed at its roots while the former is not. The DCI is designed to look past an individual’s condition and beyond the impact of public policies that often ameliorate individual distress to assess community economic well-being at its foundations.

One example of demography’s powerful effect was highlighted by Howard Schwartz, writing in the New York Times: “From 2010 to 2013, for example, employment in the most prosperous neighborhoods in the United States jumped by more than a fifth, according to the group’s analysis of Census Bureau data. But in bottom-ranked neighborhoods, the number of jobs fell sharply: One in 10 businesses closed down.”

“It’s almost like you are looking at two different countries,” said Steve Glickman, executive director of the Economic Innovation Group.

The study’s data provides support for the concerns of many that the economic divide in America is growing and needs to be addressed more aggressively.

The one-fifth of U.S. zip codes with the highest distress scores—from 80 to 100—are considered distressed communities, and for good reason: In the average distressed zip code, nearly one-quarter of adults have no high school degree and 55 percent of adults are not working. The median income of these neighborhoods stands, on average, at only 68 percent of the state’s median income. Nearly one in seven homes stands vacant, and 27 percent of individuals live in poverty. What is more, during three years of nominal growth and recovery at the national level, the average community in these zip codes—one-fifth of all U.S. zip codes—saw employment decline by 6.7 percent and the number of businesses shrink by 8.3 percent.

Contrast that with the experience of the most affluent communities:

The typical prosperous community—the one-fifth of U.S. zip codes with the lowest distress scores, those falling between 0 and 20—looks very different. A resident of these zip codes is unlikely to encounter a neighbor without a high school degree, and the vast majority of adults have work. Few homes stand vacant. And the economy is booming: From 2010 to 2013, the best-off one-fifth of U.S. zip codes enjoyed 17.4 percent job growth and saw the number of business establishments in their neighborhoods rise by 8.8 percent.

The economy—measured as businesses and jobs—is slowly vanishing from the country’s worst-off rural and urban areas. From 2010 to 2013, the most distressed 10 percent of zip codes lost 13 percent of their jobs and saw more than one in 10 business establishments close.

During that same period, the most prosperous 10 percent of zip codes saw employment rise by a staggering 22 percent and the number of business establishments rise by 11 percent.

John Lettieri, senior director for policy and strategy at EIG, described these findings to the New York Times.

The most prosperous areas have enjoyed rocket-ship like growth…by contrast, in places the recovery has passed by, things look very different. In the nation’s most distressed communities, the average house dates to 1959, 30 years older than the typical structure in the wealthiest ZIP codes. Population growth is flat or falling, not rising as it is in wealthier areas. More than half of adults don’t have a job, and nearly a quarter lack a high school diploma. In the most prosperous ZIP codes, many of which are in the Sun Belt, only six percent of adults dropped out of high school and 65 percent are employed. They are enjoying a boom that camouflages what’s going on at the bottom.

The study also found that “Eighty cities alone account for only 40 percent of the country’s total urban population but contain fully two-thirds of the country’s urban population in distress. […] As a result, the burden of distress falls disproportionately on the very places that are least equipped to reverse their economic declines. The recent tragedy unfolding in Flint, MI—an island of economic distress not far from Detroit’s prospering northwestern suburbs—demonstrates clearly the repercussions of such imbalance.”

The authors conclude with a challenge to those concerned about the human cost of the economic reality they have highlighted.

The findings…present an urgent public policy challenge to U.S. lawmakers. Instead of lifting distressed communities, the recovery has left them and their residents even further behind. And once distress sets in, it seems to persist: even the country’s most dynamic and successful cities struggle to achieve geographically equitable prosperity. New approaches are needed to enable more people in more places to participate in and benefit from economic growth.

Will this be a wakeup call in this election season, or just another study to be filed?—Martin Levine