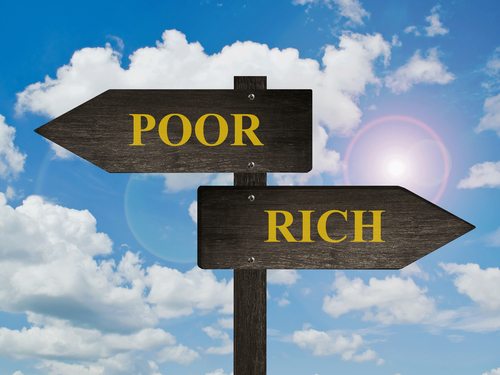 In New York City, the controversy has the moniker, “Rich Door, Poor Door.” One writer has called the policy “Dickensian.” Other observers take the less literary route and call it a practice of economic segregation. The historical references are “the back of the bus” and “separate but (un)equal.” For a little extra wit, the New York Post calls the controversy, “Class Doorfare.”

On the Upper West Side, a developer is building a new 33-story luxury high-rise condominium building with 219 units for sale at prices potentially in the millions. In order to get City approval for increased development area (through increased “air rights” allowing for a building taller than the area’s zoning would typically allow), the Extell Development Company is including 55 affordable rental units in the complex. Affordable units in the complex will be rented to households with incomes of 60 percent of median income or less. The program to incentivize developers to build affordable housing within luxury residential development plans is the city’s Inclusionary Housing Program, known as the 421a program.

The public outrage concerns Extell’s plan that the building at 40 Riverside Drive will have two separate entrances, one in front for the rich condominium owners, one in a back alley for the renters of the affordable units—a “poor door.”

Although appalling to many, including Mayor Bill de Blasio and Manhattan Borough President Gail Brewer, the practice is legal, an option allowed in New York City’s inclusionary development zoning laws, approved during the administration of Mayor Michael Bloomberg. De Blasio’s office reports that several other similar buildings received approval during the Bloomberg administration, and de Blasio’s people believe, according to Al Jazeera, that “it would be too costly and time consuming for the city to stop the buildings from going up.” A de Blasio spokesperson told Newsweek that the administration would try to change the program in the future to prevent separate poor doors.

The poor door at 40 Riverside matches the design of the building. With their own segregated entrance and apartments in a specific part of the building, the renters living in the affordable units will actually never mix with the occupants of the luxury condos. Give credit to the architects for a physical design that protects rich people against the sight and sound of their less wealthy neighbors. In addition, the “affordable” residents are prohibited from using any of the amenities in the building such as the gym and the pool.

Defenders of the Extell practice explain that this is just the way of the world. When you fly first class, you sit in the first class section of the plane. If not, don’t expect a drink before the flight or a seat that allows you to lie flat. If you want developers in Manhattan to build affordable housing units, defenders say, even if they’re getting increased density, valuable air rights, and exemptions from other zoning requirements, you have to give the developers and their luxury condo purchasers the ability to segregate the affordable housing tenants away from them—in a separate part of the building, or even in a separate building (or in a different neighborhood). Extell CEO Gary Barnett defended the practice, saying in Crain’s New York, “Frankly, it’s the only possible way to do inclusionary housing that’s for sale in a prime location.”

The stake for nonprofits is both obvious and surprising. The obvious part is that affordable housing preservation and production is a key nonprofit goal in Manhattan and in other cities in the U.S. Is the Extell strategy the kind of affordable housing development nonprofits want? Or is affordable housing so needed that nonprofits will accept the economic segregation practiced by Extell and others? The surprising part is the contention of New York Post writer Steve Cuozzo that the separate poor door makes it “easier down the road for the [affordable] units to be managed separately by a non-profit.”

Although the poor door controversy heated up this past weekend, the Bloomberg-era policy and Extell’s plans for 40 Riverside Drive have been known and discussed for some time. Moreover, the poor door policy or practices like it are not unknown in New York City. For example, less than half the residents at Stonehenge Village at West 97th Street—the ones not in long-established rent-stabilized apartments—get access to the building’s fitness center. A management representative explained, “The small gym we built and opened this week is different in that it is aimed specifically at new and prospective tenants who expect certain amenities and incentives that are commonly available to market-rate renters.”

The practice is not unknown elsewhere in the world as well. In London, Tory Mayor Boris Johnson says, according to the Guardian, that he will “discourage use of separate entrances for poorer tenants” in social housing projects, but he will not try to ban them. “I don’t like them and they are something that I try to get out of the planning application if I can,” Boris said.

Don’t assume that this is simply a practice of retrograde Republicans who want to perpetrate housing segregation on economic grounds. Extell’s Barnett has long been a generous contributor to Democrat political candidates, including to Rep. Carolyn Maloney, Senator Cory Booker, the Democratic Senatorial Campaign Committee, Governor Andrew Cuomo, and, in a tiny amount a few years ago, Mayor Bill de Blasio. –Rick Cohen