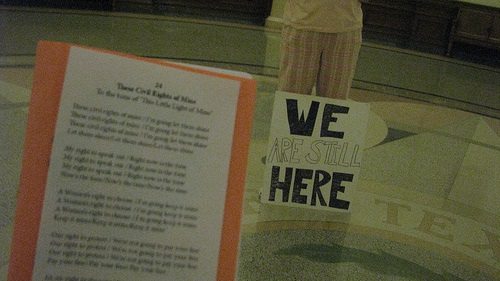 In Texas, 13 to 15 clinics providing abortion services have to close after a new law took effect that requires, among other things, that doctors at abortion clinics have admitting privileges at a local hospital. This can be very difficult for clinics in more isolated locations, and as those clinics close, a grassroots effort to help disadvantaged women in rural areas seeking abortion services has been mobilized.

RiseUp Texas participated in the protests during the special legislative sessions when the law was debated, and members were arrested for civil disobedience during the legislative proceedings. Now, coordinating through Occupy-style general assemblies, the group is pursuing multiple strategies, including defending the remaining clinics in Texas and fundraising to help transport rural women to clinics in urban areas where doctors have hospital-admitting privileges.

“We continue to have a really strong core of organizers who are focused on making sure the conversation happens around the communities that are most affected by this kind of legislation, the marginalized communities that are most affected by health care and the legislation in general, and making sure that those voices really, really get heard,” RiseUp Texas spokesperson Rockie Gonzalez told TruthOut.

Additionally, the Lilith Fund, based in Austin, which provides financial assistance and counseling to low-income women seeking abortion services across the state, reportedly plans to gather information about transportation needs as part of its application process. “We’re constantly making sure that when we get into dialogue with people about reproductive justice that it’s not this dichotomy of abortion rights or not, or if abortion is good or bad, or wrong or right, but that we’re talking about body rights and body autonomy and that body autonomy is an issue that affects, again, largely marginalized communities and people of color. So we’re strategizing around those concepts,” Gonzalez said. “Our real goal is to get outside of the urban centers and do support and solidarity for folks who are outside of urban privilege.”—Ruth McCambridge