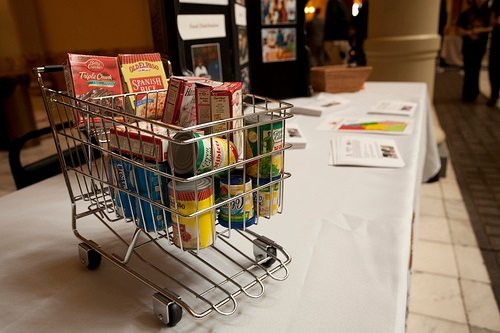 Who would have ever thought that food banks would be required to pay sales taxes on the goods and produce they provide for the hungry? Last year, Georgia’s Republican governor Nathan Deal vetoed a bill that would have reinstated a provision for exempting food banks from sales taxes. This year, he is signing legislation—House Bill 958—that would do the trick. Bill Bolling, director of Atlanta Community Food Bank’s director, said that the tax break would save food banks $2.5 million.

“This makes all the sense in the world,” Bolling said. “To make food banks pay taxes on food for the hungry made no sense.”

Would you rather not know how sausage is made? That’s the problem of tax legislation. To get this food bank sales tax exemption enacted, House Bill 958 became something of a tax break smorgasbord, with millions in breaks for more than food banks. Among the winners in the legislation are a tax credit for “qualified entertainment production companies” (that is, video game developers) and exemptions from sales and use taxes for the construction of “competitive projects of regional significance” (that is, for the new stadiums for the Braves and Falcons).

Our guess is that the Braves and Falcons will save more from taxes than the food banks. The governor’s advisory “competitiveness” panel gave a thumb’s-up for the food bank tax break and for the stadiums, though it nixed the video game tax credit and the other tax incentives embedded in the package. That didn’t bother Governor Deal. It is a case study of an essential fact of tax incentives in the U.S.: for everyone who complains about tax exemptions for nonprofits, the states and the federal government are quite willing to give away plenty more in tax breaks for for-profit companies that don’t quite generate societal benefits comparable to public charities.—Rick Cohen