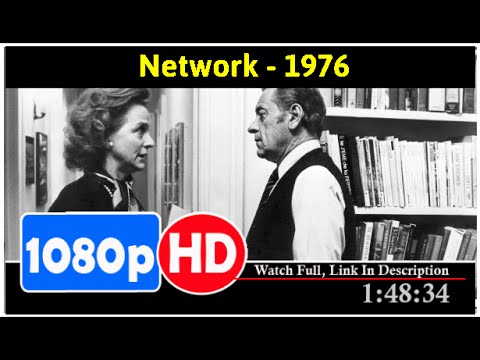 You probably have not seen the film, but vaguely know its noted line, “I’m mad as hell, and I am not going to take this anymore!” Mitt Romney said these words last February to describe the popularity of Trump and Sanders. It could be said that Trump embodied this message as his primary campaign strategy.

Network is a 1976 satirical black comedy-drama about a fictional television network struggling to overcome poor ratings. The film serves as an indictment of corporatized news media and the corrupting and dehumanizing effect it has on civil society. The film won four Academy Awards, and in 2007, the American Film Institute chose it as 64th among the 100 greatest American films.

Some say the film predicted President Trump. Writing for IndieWire, Landon Palmer correlates the film’s messages to our recent election.

With the ascent of an actual reality TV star to the U.S. Presidency following a broadcast news cycle that worked for everything but a dedication to public interest, it would seem that this depressing political season has reached the logical end of the film’s apocalyptic forecast, landing on a reality too absurd for even Network to dramatize: Howard Beale as President.

How did Trump become president? According to the Associated Press last August, “Trump’s campaign has posted just seven policy proposals on his website, totaling just over 9,000 words. There are 38 on Clinton’s ‘issues’ page, ranging from efforts to cure Alzheimer’s disease to Wall Street and criminal justice reform, and her campaign boasts that it has now released 65 policy fact sheets, totaling 112,735 words.” This study shows how and why the media’s abandonment of issues coverage benefited Trump. This report from Harvard Kennedy School’s Shorenstein Center on Media, Politics and Public Policy shows only eight percent of news coverage of both parties’ conventions focused on policy issues.

At the climax of Network, the chairman of the fictitious media owning conglomerate explains reality as he sees it to the film’s central character, a television star, Howard Beale.

What do you think the Russians talk about in their councils of state — Karl Marx? They get out their linear programming charts, statistical decision theories and minimax solutions and compute the price-cost probabilities of their transactions and investments just like we do.

We no longer live in a world of nations and ideologies, Mr. Beale. The world is a college of corporations, inexorably determined by the immutable bylaws of business.

The world is a business, Mr. Beale! It has been since man crawled out of the slime, and our children will live, Mr. Beale, to see that perfect world in which there is no war or famine, oppression or brutality — one vast and ecumenical holding company, for whom all men will work to serve a common profit, in which all men will hold a share of stock, all necessities provided, all anxieties tranquilized, all boredom amused.

A vigorous civil society is anything but being tranquilized and amused, but “the screen” in its many new forms, offerings, and sizes is perhaps as great a threat to civic engagement as whoever is running the government. Common Sense Media group and Northwestern University’s Center on Media and Human Development released new research yesterday showing that parents spend more than nine hours a day “in front of a screen of some kind, with most of it—7 hours and 43 minutes—unrelated to their job.”

The only antidote to the frightening image described above is for citizens to be informed and engaged, not merely “mad as hell” or distracted by tranquilizing and amusing entertainment, including much of what passes as news media today.

As our new U.S. government begins to take shape, the entire range of organized groups and institutions that constitute civil society, including the media, must fulfill its duty to limit and control the power of the state and to ensure that the state protects its most vulnerable citizens. We need to promote more informed political participation to accomplish this. By making the state at all levels more accountable, responsive, inclusive, civil society strengthens citizens’ interest in and regard for the state. There is no America? There is no democracy? That is for us to say.—James Schaffer