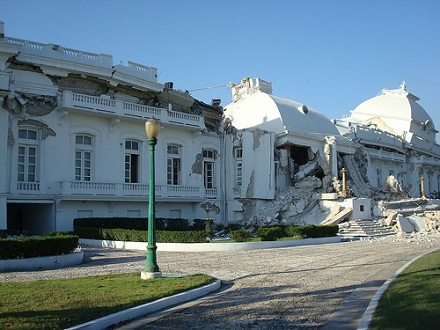 J/P HRO, a nonprofit founded by actor Sean Penn in response to the catastrophic earthquake that hit Haiti in 2010, will soon undertake the demolition of country’s storm-devastated National Palace. The National Palace has been gradually crumbling to pieces upon itself since the earthquake. Penn is an ambassador-at-large for Haiti, and his nonprofit’s work on demolishing the National Palace will reportedly come at no cost to the Haitian government. J/P HRO Executive Director Ron Baldwin told the Associated Press that he hopes demolishing the decaying palace will bring with it a symbolic value: “It’s an important project, an important step for the government, for Haiti, for the people of Haiti to move on.”

Still, at least one blogger, S. Maxime, suggests that there may also be a potentially powerful negative symbolism in having Penn’s NGO take on the task of razing the National Palace. Writing about the Citadel as well as the National Palace in Defend Haiti, Maxime comments:

“I don’t typically fly off the handle and say things like ‘Haiti is not sovereign’ when I see diplomats from other nations give ‘strong suggestions’ to our leaders in government as to what they should do. I don’t even completely disagree with foreigners helping to finance and, at a distance, observe our elections. Although these things are not desirable, they are a fact of life welcomed as we try to grow stronger as a democracy.

We are and should be grateful for the international community which has taken the lion’s share of the load of reconstructing are country. Foreign assistance—in most cases, not all—is a demonstration of friendship and community for the Haitian people.

After the collapse of the Palace, government officials made use of a small police station near the airport to coordinate international aid. They now work out of a group of prefabricated buildings on the grounds of the National Palace. The Haitian presidency has described the razing as the beginning of the Palace’s reconstruction. –Mike Keefe-Feldman and Ruth McCambridge