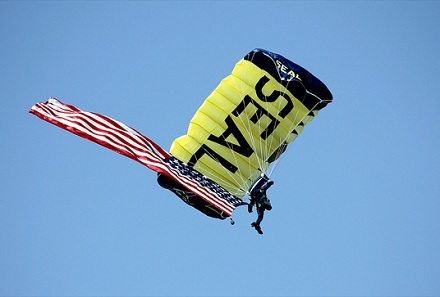 Last week, NPQ noted that the Navy SEAL Foundation decided to decline any charitable contributions brought about by sales of No Easy Day, the bestselling account of the raid that killed Osama Bin Laden by former Navy SEAL Matt Bissonnette, who wrote the book under the name Mark Owen. Now, another charity, the Tip of the Spear Foundation, has told the Atlantic Wire that it will not take any proceeds from the book’s sales. This may all be moot and potentially very costly because the Pentagon is threatening to sue, hinting that it might aim for the entirety of the book’s royalty proceeds. Even if a charity did not have moral objections to Bissonnette’s publishing, who wants to get in the middle of that fight (unless the charity were interested in taking a principled stand against the Pentagon’s position)?

In the book, Bissonnette mentions three charities that he wants readers to help him “raise millions of dollars for,” so that leaves only one of the three specifically named charities to account for: the All in All the Time Foundation, which now faces a choice of joining the other two named foundations in protesting the book’s publication, which Pentagon officials say didn’t follow standard protocol for publishing clearance, or potentially becoming a major—if not the principal—beneficiary of the funds generated by the book.

Speaking with the Virginia Pilot, All in All the Time Foundation Executive Director Christina Valentine says her board is still considering which way to go. “I need to sit here and really mull it over,” Valentine told the Pilot. “I don’t want to judge anybody or make an uninformed comment.” The book’s publisher, Dutton (Penguin), says that the author “is giving the majority of the proceeds from his book to charity but he has never said where.”

Here is the only interview that has been broadcast with the author, from “60 Minutes.” –Mike Keefe-Feldman