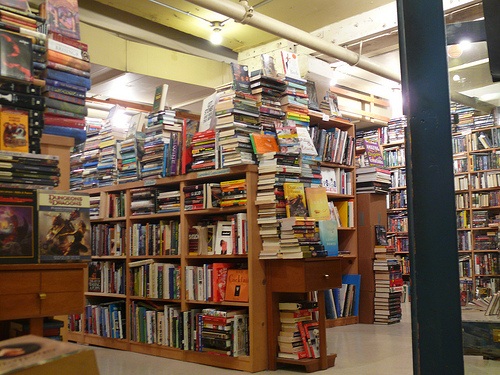 In a reminder that people do not always want a tax break for their contributions, and that many small businesses play critical roles in the social fabric of communities, independent bookstores have been trying out crowdfunding to make it through some of the rough spots caused by the profound changes in the industry. Will the practice stick? Are we watching a more permanent change occur?

When Adobe Books in San Francisco’s Mission District faced a devastating rent increase it nearly went under before it raised $60,000 on Indiegogo.com. The Spellbound Children’s Bookshop in Asheville, North Carolina raised $5,000 to move its location, and Books of Wonder in Manhattan raised more than $50,000 to cover losses experienced during the recession. Peter Glassman, the owner of Books of Wonder, said that his thirty-year-old business was in need of help, so he thought he would ask for aid. “I thought, given the financial strains we’re under at the moment, perhaps this is the way to prevent us from getting into a really desperate situation,” Mr. Glassman said. “You never tell people your problems. The worst you say is, ‘Business is a little tight.’”

Price wars between Internet retailers have resulted in steep discounts for books bought and sold online and electronic books have eroded still more sales, but the owners of independent bookstores believe that their customers are attached to them and are willing to pay for the community and ambience of the local bookshop.

“I think it’s an indication of the emotional connection that many customers have with their bookstores,” said Daniel Goldin, the owner of the Boswell Book Company in Milwaukee. “Every customer who buys a book at an independent could do it in a different way, a cheaper way. A lot of customers position us in their head like the nonprofits they support, like a humane society or a park.”

The practice is not just being used as a last ditch strategy by what some might see as “failing” enterprises. Some bookstores are crowdfunding not because they are suffering at their current scale, but because they want to expand. BookCourt of Brooklyn recently launched a campaign to help pay for a new store in the Catskills.

Zack Zook, the events and development director for the store, said, “There’s something that feels really neutral about throwing a hundred bucks in a pot…People like to be affiliated with a mission. And with any independent bookstore, it’s almost like a nonprofit—there’s really no money to play with.”

NPQ believes that there is a change afoot in the economy that might eventually lead us back to community based production and retail but possibly on a more loosely networked basis but what do we know?—Ruth McCambridge