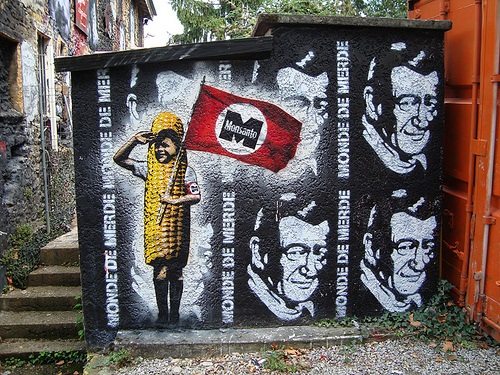 An array of nonprofit groups have filed friend of the court briefs for both sides in a case about seeds and patents that hit the U.S. Supreme Court yesterday. The National Farmers Union, the American Antitrust Institute, Food & Water Watch, the Organization for Competitive Markets, and the National Family Farm Coalition urge the Supreme Court to side with Vernon Hugh Bowman, a 75-year-old Indiana farmer who was sued by the corporate agricultural biotechnology corporation Monsanto after he planted soybean seeds. On the other side, the American Intellectual Property Law Association, the Intellectual Property Owners Association, the American Seed Trade Association and several others filed briefs in support of Monsanto.

Bowman purchased the seeds in question from a grain elevator, not from Monsanto, but some of the seeds in that grain elevator were the progeny of Monsanto’s patented Roundup Ready seeds (a bio-engineered kind of seed that is designed to survive Monsanto’s Roundup weed-killing chemical spray). Therefore, Monsanto argues that Bowman’s planting of the seeds that he paid for constitutes patent infringement, and a lower court agreed. The essence of Bowman’s argument, and the argument advanced by the nonprofit groups in their supporting brief, is that in the ongoing balance between patent law and antitrust law, Monsanto’s seed patent runs afoul of the Supreme Court’s first sale doctrine, the concept that “when the patentee…sells a machine or instrument whose sole value is in its use, he receives consideration for its use and he parts with the right to restrict that use.”

The first sale doctrine is what enables you to put that used book that you read up for sale on eBay. But according to the New York Times, the Supreme Court appears to be leaning toward siding with Monsanto. The Monsanto argument is that, in the words of Monsanto lawyer and former U.S. Solicitor General Seth P. Waxman, “Without the ability to limit reproduction of soybeans containing this patented trait, Monsanto could not have commercialized its invention and never would have produced what is, by now, the most popular agricultural technology in America.” In addition, Monsanto lawyers say that the first sale doctrine may allow one to exert control over a product that one has purchased, but it does not allow one to make a copy of that product.

Supreme Court Justice Elena Kagan addressed one particularly thorny issue here when she noted that “seeds can be blown onto a farmer’s farm by wind” and that, given that Monsanto’s seeds are quite widespread, the company has the “capacity to make infringers out of everybody.” If the New York Times’ read is correct, the legal arguments may favor Monsanto in the eyes of the Supreme Court justices, but given the potential outcomes that might accompany such a decision, it’s not hard to see why some nonprofit groups have asked the court to side with the farmer. If Monsanto wins the case, it will need to be watched like a hawk to ensure that it doesn’t leave American farmers with just two choices: customer or criminal. –Mike Keefe-Feldman